The doctrine of frustration was developed in Taylor v Caldwell (1863). In that case, the plaintiff had agreed to hire a music hall for concerts on four specified evenings. A fire destroyed the music hall before the concerts took place. The  plaintiff sought damages from the owner  of the hall on the basis that he was in breach of his contractual obligation to  make the hall available. The Court of Queen’s Bench rejected the claim on the basis that:

The doctrine was quickly extended to cases where, without physical destruction, the commercial adventure envisaged by the parties had been prevented, and in particular, was applied to the constructive total loss of ships let on charter.

The distinctive feature of frustration was that it immediately discharged the contract and all contractual liabilities (including the obligation to pay damages). As such, the doctrine presented an attractive option for the owners who recovered the agreed value from underwriters, in excess of the market value of the vessel, and were able to save not only the cost of repair but also any  cost associated with future performance  of the charter.

Although the existence of the doctrine of frustration became firmly established, its precise basis has been the subject of considerable development over time.

When the doctrine was reviewed by the House of Lords in Davis Contractors Ltd v Fareham UDC [1956], its basis was articulated in a rather different way.  Lord Radcliffe said that the test for frustration was whether the circumstances in which performance is called for has rendered it radically different from that which was undertaken in the contract.  Lord Reid considered that the key  question was whether the contract  made was wide enough to apply to  the new circumstances.

In Lauritzen AS v Wijsmuller BV [1990], Bingham LJ warned that the doctrine should not be invoked lightly and must be kept within narrow limits and held that the frustrating event must take place without the fault or blame of either party, and the frustration of the venture must not be due to the act or election of the party seeking to rely on it.

In Sea Angel [2007], Rix LJ was reluctant to apply a single definitive test, instead he proposed a multi-factorial approach to the application of the doctrine of frustration. In line with the rapidly developing approach to interpretation of contracts, the court must consider the matrix and context of the contract, the knowledge, reasonable expectations, assumptions and contemplations of the parties as they appeared from the contract and its matrix, the nature of the event and the reasonable and objective possibilities of future performance of the contract after the event. He said that the doctrine of frustration should not be divorced from the considerations of justice, and the interests of justice should be the underlying factor in the application of the doctrine.

In Bunge, a ship let on time charter was so badly damaged that it was classified as a constructive total loss: the cost of repair significantly exceeded the value it would have had if repaired. The owners claimed that the time charter was frustrated as a result and so the charterers could not claim any damages. The Commercial Court rejected this mechanistic approach to the doctrine of frustration.

Instead, Mr Justice Flaux considered whether, in light of the terms of the charter as a whole, the risk of the frustrating event had been contemplated and allocated between the parties. He concluded that the insurance clause had the result of creating a fund sufficient to repair the vessel, and so the risk that such repairs would be required had been contemplated and it had been agreed that it would lie upon the owners. If service under the charter could not be performed as the owners chose not to undertake those repairs, the cause of that inability to perform was not the original allegedly frustrating event but that commercial decision. Consequently, the charter could not be treated as having  been frustrated.

Kyla Shipping Co Ltd (the owners) let their vessel ‘KYLA’ to Bunge SA (the charterers) for a period of 12 to 15 months on an amended NYPE 1946 form, including a warranty given by the owners that the vessel would be insured for $16m throughout the charter term. The vessel was damaged in a collision. Repair costs were estimated to be $9m but the sound market value of the vessel was only $5.7m. The owners, therefore, chose not to repair the vessel and persuaded underwriters it was a constructive total loss. The underwriters paid $14.2m and the owners sold the vessel for scrap for $3.3m.

As the vessel would not be repaired, it was unable to complete the charter service and the owners claimed that the charter had been frustrated. The claim was referred to arbitration and the arbitrator agreed with the owners, holding that the insurance clause did not oblige the owners to undertake the repair. The charterers appealed to the Commercial Court arguing that the doctrine of frustration was inapplicable.

The owners submitted that a charter was frustrated if the vessel became a constructive total loss, namely the cost of the repair exceeded the value of the vessel. It cannot have been envisaged at the time the charter was made that the owners would be required to pay more than the vessel was worth to fulfil its charter obligations.

The charterers submitted that there was no general principle that a charter party was frustrated in the event of a constructive total loss and that the correct approach was to consider whether the charter had allocated the risk of the event that occurred. They also argued that it would be unfair to conclude the charter was frustrated because this would give the owners a large profit from their decision not to perform the charter, and would leave the charterers shouldering a $4m loss.

Flaux J said that the decision could not depend on the financial result achieved but must be decided as a matter of principle. He held there was no rule of law that a charter party would be frustrated in the event of a constructive total loss.

He applied an amalgamation of the tests for frustration formulated in Davis Contractors and Sea Angel:

He held that the key factor was whether the contract, on its true construction, provided for the event or contingency that had occurred or allocated the risk of that event.

In this case, the insurance warranty went beyond the standard NYPE 1946 clause, particularly because it required the owners to arrange cover for an agreed value. Flaux J held that this represented an allocation of the risk of collision, by providing a fund from which the owners’ continued performance could be met.

It followed that, as the charter had allocated the risk of the event it could not be a frustrating event. The obligation to let the vessel remained and if the owners elected not to perform that obligation (because they chose to treat the vessel as a loss, and thereby accept the payment of $14.2m instead of having it repaired) they must meet their secondary obligation to pay damages suffered by the charterers as a result.

As such, it was impossible for the owners to claim that the collision that occurred was radically different from the original obligations, as there was a warranty that made full provisions for such an event. In effect, the warranty created an assumption of risk and responsibility on the owners to repair the vessel up to the value of $16m.

It is also interesting that Flaux J commented, albeit obiter, that the doctrine cannot apply to self-induced frustration and that it was the owners’ own decision not to deploy the proceeds of the insurance they had agreed to procure, which led to the inability to perform the charter service.

Are you obliged to  act reasonably?

Commercial contracts often contain provisions that allow one party to take a certain step, or to make a particular decision, which will have an impact on another contracting party. Commenting on such a situation in Abu Dhabi National Tanker Co v Product Star Shipping Ltd (The ‘Product Star’) [1993], Leggatt LJ said that ‘where A …

END_OF_DOCUMENT_TOKEN_TO_BE_REPLACED

The advance of GPS mapping, radar  and wireless systems are making the ‘driverless car’ a possibility, sooner than many may have anticipated. The widely reported trials of an automated vehicle fleet utilising Google technology has raised the profile of automated vehicles significantly. Following these successful trials, the US states of Nevada, California and Florida have …

END_OF_DOCUMENT_TOKEN_TO_BE_REPLACED

The UK government has recently  split up the UK Border Agency into two entities, namely the Immigration and Visa Directorate and the Immigration Law Enforcement Directorate, both of which  will report directly to the Home Office. The Tier 1 category of the points-based system1 was designed to allow highly talented migrants from outside Europe, and …

END_OF_DOCUMENT_TOKEN_TO_BE_REPLACED

Industrial heat use and the Heat Strategy

The issues of efficient heat and reducing emissions from the generation of heat are rapidly moving up the political agenda. Industry needs to watch these developments closely and be prepared. Six industry sectors, including chemicals, oil refining, food and drink, basic metals, pulp and paper and non-metallic minerals (including ceramics, cement and glass) are singled …

END_OF_DOCUMENT_TOKEN_TO_BE_REPLACED

Two recent judgments of the General Court of the EU (the Court)1 provide a stark reminder of the long reach of competition law in relation to exchanges of information between competitors. Although the European Commission’s findings of fact in these cases disclosed a frequent and detailed series of communications concerning future prices, it would be …

END_OF_DOCUMENT_TOKEN_TO_BE_REPLACED

Over recent months, international  sanctions and export controls have  featured heavily in the news; the recent escalation of tension in the Korean peninsula, the ongoing conflict in Syria  and Iran’s continued attempts to develop nuclear weapons are all examples of international situations where sanctions  or trade controls are in force. Even  though these are examples …

END_OF_DOCUMENT_TOKEN_TO_BE_REPLACED 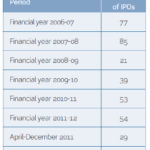 ‘The dangers of life are infinite, and among them is safety’ – Goethe. The Securities and Exchange Board of India (SEBI) issued a discussion paper on the ‘mandatory safety net mechanism’ in September 2012 (the SEBI discussion paper), inviting public comments. Briefly, this contemplates a mechanism wherein, in the event of a fall in share …

END_OF_DOCUMENT_TOKEN_TO_BE_REPLACED

In the current economic climate, it is vital for in-house counsel to have a good understanding of both the powers that an organisation has to terminate contracts in the event that the other party to the contract enters insolvency, and the powers the insolvency practitioner (IP) enjoys in  this regard. Does insolvency have any automatic …