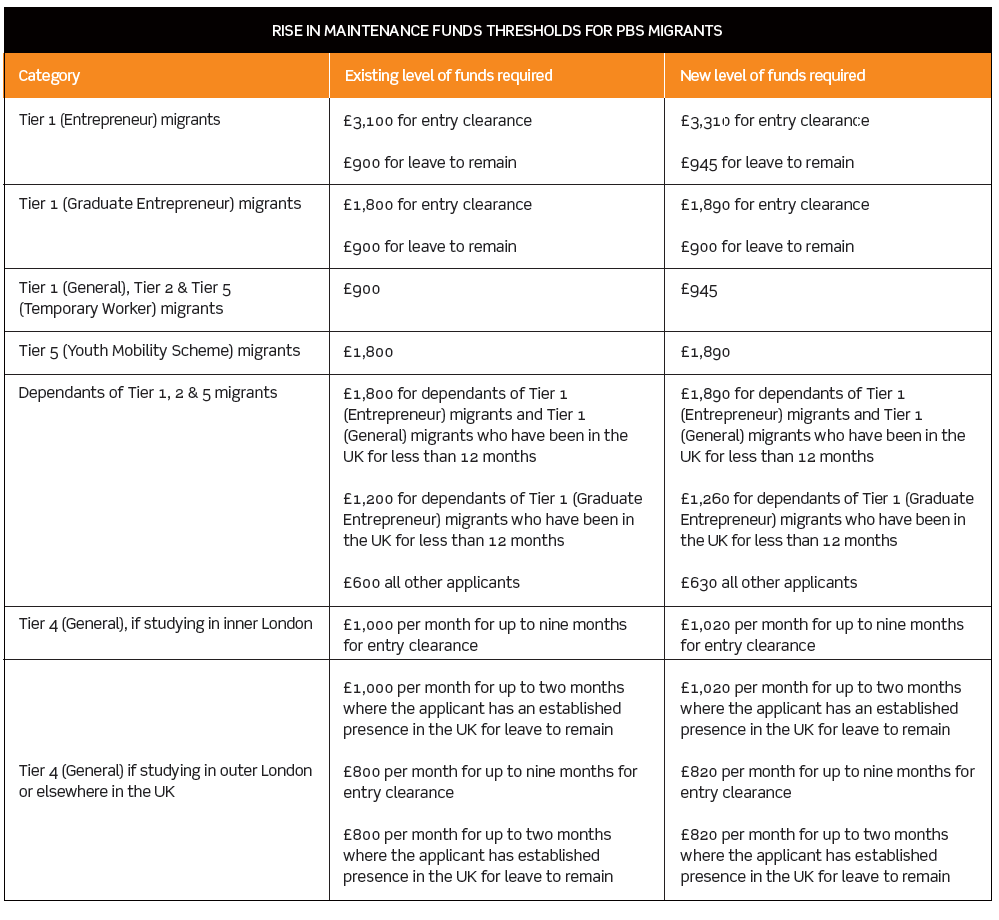 In April 2014, the government made a package of changes to points-based system (PBS) work routes to improve flexibility for applicants and help boost economic growth. The changes include amendments across all tiers of the PBS and some minor changes to the rules on family and private life with updates to the minimum salaries and maintenance thresholds.

This category closed to new applicants in April 2011 but it currently remains open for extension and settlement applications.

The Association of International Accountants has been added to the list of recognised supervisory bodies for accountants from whose members’ evidence of UK earnings is accepted.

The ‘Exceptional Talent’ category was introduced to promote world leaders in their respective fields to come to the UK to enhance the UK’s reputation for global talent. The overall limit of 1,000 places will remain for the year 2014-15.

The main addition to this route will be to allow applicants from the field of digital technology to apply. The designated body will be Tech City UK, who will endorse applications to enable migrants to apply for a visa under this category.

There will be greater flexibility to applicants to apply from any overseas country (so will not be limited to countries that they are resident in) and to switch from any Tier 1 category within the UK.

Another amendment to make the category more appealing to applicants is to allow applicants to amalgamate time spent in the UK in other Tier 1 and Tier 2 immigration categories to count towards the five-year qualifying period for indefinite leave to remain (ILR).

This category caters to applicants coming to the UK to set up, take over or be involved in the running of a business in the UK. It has the potential to benefit the UK economy but it has been abused in recent years. The changes made to this category are:

This category caters for graduates who have been endorsed by UK higher education institutions or by UK Trade and Investment to establish one or more businesses in the UK. The changes that have been made are as follows:

The Investor category is likely to change significantly over the next 12 months in light of the recent Migration Advisory Committee (MAC) report, and accordingly the changes made in April 2014 are relatively minor. Investors must still invest the funds within three months of entering the UK, however discretion will be allowed if there are exceptionally compelling circumstances for the delay in investing which were outside of the investor’s control. There are also some changes to mirror the child protection rules for applicants under the age of 18, and a minimum age of 16 held in other categories.

The main recommendations made by the MAC in their report are as follows:

1. Increase the minimum £1m threshold to £2m. This would also involve the following changes to rules on permitted investment types:

2. Introduce a ‘premium route’ instead of the current £5m and £10m routes to settlement. The premium route would be
limited to around 100 applicants per year and places would be available through an auction, with a reserve price set at £2.5m.
The reserve price would comprise of an investment of £2m by the applicant plus a gift of £500,000 donated to the UK government
to be put into a specific ‘good causes’ fund. Any excess above the reserve price would also be put into the ‘good causes’ fund.

In addition, the residence requirements for those on the ‘premium route’ would be relaxed, so that the person would only be required to be resident in the UK for a period of 90 days per year, rather than 180 days as is currently the case.

The government must now decide whether to implement the MAC’s recommendations. Therefore, changes to the Investor category are anticipated within the next 12 months.

The Home Office have made a number of changes to the PBS Tier 2 route over previous years, including the introduction of the 12-month ‘cooling off’ period. Although the March 2014 Statement of Changes adds no substantive changes to the route, it does update and provide additional options for licenced sponsors.

The period of grant that can be issued to individuals under Tier 2 is being increased to five years, from the current maximum of three years. Sponsors will retain the flexibility to issue Certificates of Sponsorship (CoS) for the period required, but will now be able to assign a CoS for up to five years. The Home Office fee for an application for leave in excess of three years under Tier 2 will be almost double the three-year fee when introduced in April 2014. It will provide employees more certainty with regards to their visa and the advantage of not having to extend at the three-year point. With a five-year visa there will not be the current opportunity at visa renewal stage to check employment details and confirm any changes to employment conditions. Accordingly, a migrant’s employment should be closely monitored and reports made to the Home Office as and when necessary, otherwise sponsors may find themselves falling foul of their reporting obligations.

An annual update is being made to the minimum salary thresholds under Tier 2, as outlined in the table below. There is a further extension until 1 October 2014 of the current exemption to advertise visa Jobcentre Plus for NHS positions, due to technical issues.

There will be increased flexibility for the transition between the Standard Occupational Classification (SOC) 2000 and the SOC 2010 system. Currently the transition must be found in a prescribed table, providing that the change is solely due to the two systems and not due to a change in the applicant’s job role.

There will also be some further changes to sponsor licence applications which, although not contained within the Statement of Changes, will likely be implemented through Home Office guidance:

For those Tier 4 students applying for leave on the Doctorate Extension Scheme, where their course of study would require an Academic Technology Approval Scheme certificate to be obtained, an amendment has been made to remove this requirement. This is only applicable where the course will be completed in less than 28 days of the date of application.

The countries and regions from which applicants are subject to different documentary requirements under Tier 4 are listed in Appendix H of the Immigration Rules. The Home Office have reviewed the list and reassessed the countries against risk and compliance criteria. It has been concluded that Oman, Qatar and the United Arab Emirates (UAE) should be added to the list on the basis of high levels of compliance of their students.

The Home Office have also removed the exemption from the genuineness test that exists for applicants from countries and regions listed in Appendix H. This enables UK Visas and Immigration officials to assess whether an applicant is a genuine student regardless of the nationality of the applicant.

There are very few changes to the Dependant route contained within the Statement of Changes. One is to restrict dependants from employment as a professional sports player or coach, which reflects the situation in other categories. The change would appear to be aimed at preventing individuals from circumventing the requirement to be endorsed by the relevant governing body.

An aspect that was previously omitted from previous changes to the Immigration Rules, and which is included in the April 2014 changes, is to allow dependent children of PBS migrants to apply for temporary leave to remain if they cannot qualify for settlement. This may be relevant for over 18 children who have not yet passed the life in the UK test.

The maintenance funds threshold for PBS migrants and their dependants has been updated in line with changes to the cost of living since they were last updated in 2012. The updates for work routes (Tiers 1, 2 and 5) are based on Consumer Price Index inflation since 2012. The updates for Tier 4 are based on the rise in the maximum package of grants and loans available to home students since 2012. The new thresholds from 1 July 2014 will be as outlined in the table opposite.

There are other scenarios under Tier 4 covered by the maintenance requirement that have not been replicated in full in the table opposite, for example Tier 4 (Child).

The Home Office now state that credit cards are not acceptable as evidence of available maintenance funds. There has been clarification that an individual can make an application for further leave to remain in the UK in the event that they are unable to apply for ILR. There are also some minor changes to the income threshold under Appendix FM and Appendix FM-SE such as overseas maternity, paternity and adoption pay can be counted as employment income.

There is now a requirement that the evidence provided for an application  needs to come from an independent  source.

Bahraini diplomatic and special passport holders will not be required to obtain a  visa for the purposes of a general visit to the UK. However, Venezuelan nationals will require a visa.

The planned closure of Tier 1 (General) will inevitably cause individuals to reconsider their future in the UK, with the change highlighting the importance of advance planning of immigration applications, such  as ILR, accordingly.

Further changes are anticipated over the next 12 months, particularly those contained within the Immigration Bill and in relation to investors following the MAC report recommendations.

Collective actions can significantly increase litigation exposure for businesses. Progressively, collective action rules are being proposed and introduced in more jurisdictions. The last few months have seen steps at both European and national level towards the adoption of new legislation designed to facilitate actions for collective redress. Sarah Croft, of Shook Hardy & Bacon International, …

END_OF_DOCUMENT_TOKEN_TO_BE_REPLACED

One, two, three: proposals for a Scottish competition authority 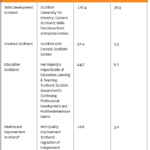