In our March article, we looked at the decision in Raymond Bieber & ors v Teathers Ltd [2014], where an e-mail in response to an offer simply saying ‘noted’ was interpreted as indicating acceptance of the offer. The legal principles relating to offer and acceptance have again been put under the spotlight in the Commercial Court’s decision in Reveille Independent LLC v Anotech International (UK) Ltd [2015]. In this case, the crux of the issue was not the written communication between the parties but the opposite: the lack of written communication set against the parties’ conduct.

While acknowledging that ‘this is a familiar situation in which parties act commercially but in a way which sits uneasily with established principles of the law of contract’, Mackie HHJ held that the claimant had communicated its acceptance through its subsequent conduct in performing obligations under the contract. As a result, the defendant was liable to pay all sums owing under the agreement: ‘the defendant entered into a deal and should be held to it’.

The established position under English law is that for a contract to come into existence, an offer must be accepted by the other party. In typical commercial situations, this acceptance is most frequently communicated by way of signature, resulting in an executed version of a contract. However, signature is not the only means by which acceptance of a contract offer can be communicated: the subsequent conduct of a party can indicate acceptance and a clear intention to be bound, regardless of the lack of a formally executed document. Whether or not a party’s conduct amounts to acceptance  will be heavily fact dependent.

Where a contract unequivocally provides  for acceptance to be communicated in  a prescribed fashion, this will tend to be  a binding requirement. However, in Reveille  v Anotech the Commercial Court held  that the conduct of the defendant in this case overrode the requirement for an executed agreement.

The claimant television company, Reveille Independent LLC, entered into negotiations with a distributor of cookware, Anotech International (UK) Ltd, with the aim of licensing certain intellectual property rights (chiefly, the use of the ‘MasterChef US’ brand) in the USA and Canada for a five-year period. As part of the envisaged agreement, the claimant would permit the integration and promotion of the defendant’s cookware products into three episodes of MasterChef US in the summer of 2011.

A ‘deal memorandum’ was produced by the parties that provided for various payments to be made by the defendant to the claimant on signature of the document and on subsequent specified events and dates.

The deal memorandum provided that it  was not to be viewed as binding upon  the claimant until it had been signed by both parties.

After several rounds of negotiations, the deal memorandum was executed by the defendant’s managing director, Mr Stevens, and returned to the claimant, along with a manuscript note that referred to the need to conclude a branding conflict with the chef, Gordon Ramsay (the branding conflict) and ‘other minor amendments’.

The claimant fulfilled all of its integration commitments. The defendant’s managing director acknowledged that the defendant was liable to pay for said integrations and requested that invoices be sent to him ‘to be paid by return’. In addition, a full range of cookware bearing the MasterChef US logo had been produced and the defendant’s sales representatives had made free use of the MasterChef name in their e-mail signatures when corresponding with  third-party retailers.

The defendant nonetheless subsequently refused to make the payments specified in the deal memorandum and the claimant sued the defendant for the debt.

Lastly, the defendant argued that even if there was a contract, it was subject to a condition precedent, namely the resolution of the branding conflict, which it contended was never fulfilled.

Mackie HHJ held that the evidence presented to him had been insufficiently compelling for him to find that Mr Friedman had actually signed the agreement. However, in spite of this, he ruled that the claimant had nevertheless accepted a contract offer on the terms of the deal memorandum and had effectively communicated this acceptance to the defendant through its subsequent conduct.

The judge examined the extent to which the claimant had performed the chief tasks that had been envisaged by the deal memorandum, namely the integration of the defendant’s cookware products into episodes of MasterChef US and the licensing of its intellectual property rights.

Mackie HHJ found that it was overwhelmingly clear that the work envisaged by the deal memorandum had in fact been carried out by the parties and moreover that there was strong evidence that both had acknowledged this fact.

The defendant raised a further argument that the deal memorandum was not capable of acceptance after the claimant had sent the draft long-form agreement to the defendant. The defendant insisted that this had constituted a counter-offer and, therefore, had amounted to a rejection of the offer to contract on the terms of the deal memorandum. Mackie HHJ summarily dismissed this contention, stating that this draft long-form agreement had merely been part of a subsequent and distinct chain of negotiation which it had been envisaged would lead to a separate contract that would supersede the deal memorandum. The fact that such a contract never came into existence was entirely immaterial. By the time the long-form agreement had been sent, the claimant’s conduct (as outlined above) had already been sufficient to communicate acceptance of the original contract offer adequately.

With respect to the branding conflict, Mackie HHJ examined the construction of the manuscript comment by Mr Stevens of the defendant, as well as each side’s interpretation of what it referred to. The claimant argued that this comment related solely to Mr Ramsay being marketed on the QVC website as ‘The Master Chef’; an issue which had been addressed. The defendant maintained the issue was the removal of Mr Ramsay’s cookware from the market entirely.

The judge favoured the claimant’s interpretation. He found that both sides knew that the claimant could not prevent the chef Gordon Ramsay from marketing his own range of cookware in the US, and that it was therefore unlikely that the parties would have agreed to make the existence of the entire contract dependent upon fulfilling this condition which could not be met. In any event, the issue was never raised again during the negotiation of the long-form agreement, suggesting that it had gone away after that point – most likely as a result of the conversations with QVC.

The facts of the case and, in particular, the defendant’s conduct was such that the ‘right’ conclusion could only be that the parties had reached agreement on the terms of the deal memorandum. As Mackie HHJ put it:

‘What more powerful evidence of the fact that the defendant had received notice of acceptance and, like the claimant, had performed the contract could there be?’

However, the fact is that a specific requirement of the contract in question had to be overridden in order to reach that conclusion. Determining what the court will deem the impact of a party’s conduct to be is, to say the least, an inexact science. The fact that the defendant’s conduct in this case led to an obvious conclusion should not belittle the significance of this decision: parties cannot always rely on specified requirements as to acceptance, and must be aware that courts will determine conduct with regard to a wider factual matrix rather than a few key actions. In this case, the way that the requirement for signature had been drafted was clearly a persuasive factor in the judge’s decision.

Mackie HHJ’s ruling on the issue of  counter-offers versus new chains of negotiation is also interesting. Had the claimant not already been in the process of carrying out its obligations under the purported contract by the point at which it commenced the subsequent, discrete chain of negotiation, it seems eminently possible that the judge would indeed have accepted the defendant’s position that the draft  long-form agreement constituted a  counter-offer, thus rejecting the offer on the terms of the deal memorandum. Accordingly, the context within which any negotiations take place cannot be ignored for the purposes of establishing the true nature of any given action.

Under English law, a letter of intent or heads of terms will not constitute a binding agreement and can be used to set out key provisions ahead of locking parties into a formal contract. In the present case, some perfunctory gesture was made towards achieving a similar result by means of the provision requiring the signatures of both parties. On the face of it, the inclusion of this clause appeared to indicate the parties’ intention for the final agreement to be recorded in a relatively formal document. However, the fact that the provision spoke unilaterally to the claimant’s rights scuppered any potential protection that the defendant may have been able to derive from its inclusion. Contracting parties should be alive to similar interpretations of any contracts under negotiation where preparatory work is underway.

Commercial realities will frequently dictate the strictures within which contractual negotiations must operate, regardless of the best intentions in relation to clarity and certainty. In a typical commercial scenario, it may be vital for parties to commence work on a project before both sides are fully satisfied with the terms of a draft contract. However, it should be remembered that such a situation does not render the parties incapable of protecting themselves from losses for work already undertaken in the event that the envisaged agreement subsequently fails to transpire. The simple incorporation of a quantum meruit provision, stated on its face to be a binding obligation, into a letter of intent or heads of terms can offer the required flexibility to continue negotiating the finer terms of a formal contract, while also protecting the parties’ right to payment for any work actually carried out in the meantime.

END_OF_DOCUMENT_TOKEN_TO_BE_REPLACED 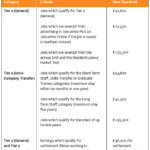 The United Kingdom has become one of the best places to live and work on the planet. This leads to a major source of population growth in the UK, but also  plays a significant role in the recovery  of the economy. The economic, social and political aspects of immigration have caused controversy  for many years …