From the inception of the Points-Based System (PBS) in November 2008, the UK government has made numerous changes to the Immigration Rules affecting each tier of the PBS. Sub-categories have been added and removed in the last two years, from the removal of Tier 1 (General) in April 2011 to the introduction of Tier 1 (Exceptional talent) in the same month; Tier 2 has been restricted through annual quotas, increase in skills threshold and minimum salary requirements and the criteria for indefinite leave to remain for PBS migrants have been gradually tweaked to exclude certain sub-categories leading to settlement upon five years continuous employment in the UK.

April 2012 has certainly been a big month for changes by our present government; the closure of Tier 1 (Post Study Work) came into effect on 6 April, further changes were made to settlement rules for Tier 2 migrants and annual limits for Tier 2 were re-set for 2012-13. A new Tier 1 (Graduate Entrepreneur) category has been introduced for graduates who have developed their entrepreneurial skills, to extend their stay after graduation to develop their business in the UK. At the same time that the PBS is gradually being shaped to welcome entrepreneurs and investors to enter and remain in the UK, the routes that were designed to support skilled labour from outside the EEA appear to be narrowing.

Following a report from the Migration Advisory Committee (MAC) published in January 2012 advising the government on the 2012-13 annual limit for Tier 2, the government announced on 4 April that the Tier 2 (General) limit will remain at 20,700; no change from the previous year. While this news has been welcomed by UK businesses and practitioners, further changes to Tier 2 that have been implemented this month and others are due to come into force on 14 June 2012, need to be looked at closely to determine the potential impact of these changes.

Changes to Tier 2 can be summarised as follows:

The HEI must also be a ‘highly trusted sponsor’ and have an established process for identifying, nurturing and developing entrepreneurs among their graduate and postgraduate population. The UKBA have applied an overall limit of 1,000 places for initial applications for each of the first two years and applicants will be granted an initial period of 12 months, with the option to extend for a further year, largely dependent on whether the HEI is satisfied of the progress a migrant has made. Other key points of the scheme are as follows:

The government viewed Tier 1 (Post Study Work) as an opportunity for migrants to take unskilled jobs/jobs that can be filled by the resident workforce. However, the government has introduced the following post-study work provisions into Tier 2 to soften the blow:

As graduates will be exempt from the resident labour market test, the good news for employers is that current Tier 1 (Post Study Work) migrants will be able to also switch into Tier 2 (General) as of 6 April without having to complete six months employment in the same role with the same organisation to benefit from the resident labour market test exemption.

Changes to take effect from June 2012

Employers and practitioners also need to be aware of the changes that are coming into force from 14 June 2012.

Twenty-seven jobs are being removed from the UKBA’s occupation list in light of the government’s announcement to increase the skill level under Tier 2 from National Qualifications Framework (NQF) 4 to NQF6. For many businesses, the removal of these jobs from the skilled list, such as IT technicians, will lead to staff shortages if alternative code cannot be used to sponsor a non-EEA national.

The UKBA has recognised that it is not appropriate to advertise highly skilled jobs (within PhD level) and positions that attract a salary of £70,000 in Job Centre Plus, and therefore they are exempt from the Job Centre requirement, although positions will still need to be advertised in one other medium. There will also be an extension to the validity period of a resident labour market test from six months to 12 months for PhD-level jobs.

The level of funds to satisfy the maintenance requirement will also increase from £800 to £900 for Tier 2 migrants and from £533 to £600 for their dependants as of 14 June 2012. These funds must either be held by the migrant and their dependants for a consecutive 90-day period or certified by the employer. The inability to satisfy this requirement will lead to the refusal of an entry clearance/leave to remain application, with costly consequences.

The recent changes have reinforced the government’s desire to restrict Tier 2 to highly skilled occupations and at the same time, encourage entrepreneurs to invest in the UK. The introduction of a 12-month ‘cooling-off’ period under Tier 2 could affect the performance of overseas companies operating in the UK and, despite the new provisions allowing students to switch into Tier 2 in certain circumstances, the closure of Tier 1 (Post Study Work) could deter students from applying to study in the UK, as the routes to work in the UK after graduation have become more restrictive.

END_OF_DOCUMENT_TOKEN_TO_BE_REPLACED 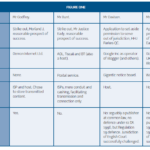 END_OF_DOCUMENT_TOKEN_TO_BE_REPLACED

Is your Dutch joint venture shareholding safe and sound?

END_OF_DOCUMENT_TOKEN_TO_BE_REPLACED

The legality of put and call options in India is a subject of intense speculation. It became the subject of controversy when the Department of Industrial Policy and Promotion (DIPP) recently treated ‘in-built options of any type’ as debt; not permissible as foreign direct investment, only to delete the investor-offending phrase without much ado, a …