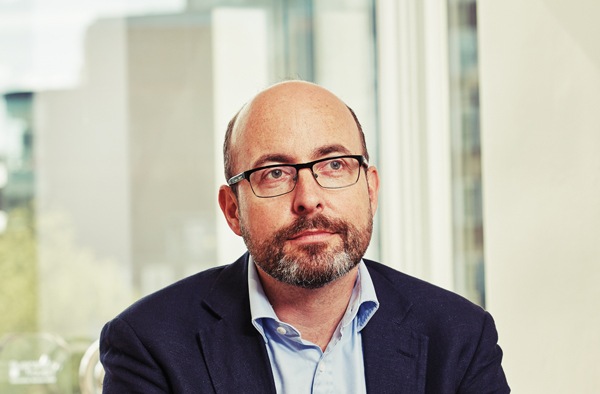 The train puns were inevitable, but it took longer than expected. Towards the end of my conversation with the general counsel of online ticket retailer trainline, Neil Murrin, he says: ‘It’s a matter of getting people to join us on that journey.’ And adds: ‘Getting people on the right track and all that.’


Coming from a family of medics, Murrin was intent on avoiding a career in health services. He cites his earliest interest in law as originating from seminal-yet-cheesy drama series L.A. Law, in addition to the influence of his solicitor uncle. He recalls: ‘I’ve always been interested in economics and companies. There was an understanding that law gives you a good training in those areas and could move you towards the company side.’

Murrin’s career started at the University of Southampton. After leaving with a law degree, he joined shipping specialist Sinclair Roche & Temperley, which would merge with Stephenson Harwood in 2002. At Sinclair Roche, Murrin handled a range of shipping-related work, but he also got his first taste of transactions. ‘When I did my corporate seat I realised that’s where my interests lied. I enjoyed the big deals and tough deadlines, and it also gave you an overview of what was important to a company.’

After leaving Sinclair Roche in 1998 following a four-year stint, Murrin moved to Nabarro where he began to focus on M&A. He says: ‘I enjoyed understanding how companies worked and what their drivers were. It was the closest I was going to get without being in a company.’ Although he relished the M&A work he did in private practice, Murrin was strongly drawn to move in-house. ‘While private practice gave me technical skills, it felt like a conveyor belt where you’d finish a deal and you never knew what happened after that. You moved on to the next completely unrelated deal. I wanted to feel some ownership.’

Moving in-house seemed inevitable, which he did in 2001, taking a legal position at British satellite communications firm Inmarsat. ‘My jokes of it “not being rocket science” were never well received there, but it was incredible. You went to the second floor of that building and it was like Star Trek. You have multi-screens showing where satellites were and people driving them around.’

The most prominent piece of legal work Murrin completed at Inmarsat was advising on its 2005 acquisition by buyout houses Apax Partners and Permira. He also helped the company move towards its initial public offering (IPO) in the same year, before leaving to become legal and HR director of trainline.

Murrin has good memories of Inmarsat but argues the trainline opportunity was too good to turn down. ‘Back then, the tech bubble had come and gone, and we were beginning to see who the new tech companies were that had survived that and had a proper business case. Trainline gave me the opportunity to become head of legal and grow a team. That was a big challenge, but doing it in a high-growth company was exciting.’

Despite now having broad recognition as an app, Murrin describes trainline as ‘one of the original .com’ survivors. Trainline was set up in 1997 by Virgin, purely because it had to have a retail capability, which included online and call centres as part of a franchise it was bidding for. Trainline remained part of Virgin Group until 2006, when it was bought out by Exponent Private Equity for £168m.

There was a distinct culture shock for Murrin when joining trainline. He had left a previously government-owned organisation with a headcount of between 400 and 500, and joined a 40-strong team at trainline. Murrin was the company’s sole legal presence. ‘It felt very much like a start-up. It was more work than you could ever do, and you had to move very quickly and prioritise on a minute-by-minute basis.’

Murrin’s first year at trainline saw him setting the company’s legal agenda. ‘It had been spending a lot of money on external lawyers, especially on big outsourcing deals. The main thing was trying to control that spend.’ Second on the to-do list was building out the legal team and Murrin got his first assistant within that first year.

His team now consists of ten staff, with former Travers Smith lawyer James Hanratty acting as the company’s deputy GC. Murrin says: ‘James allows me to do more than just being a GC because he does a lot of the management of the legal team.’ Below Hanratty are two teams, one of which deals with the commercial and marketing side of the business, while the other handles the carrier and operations.

‘Trainline has got four or five business strings,’ Murrin says. ‘We have the B2C arm, which is the trainline you know. We also have a B2B arm, which is where we sell our ticketing services to travel agents and companies. We also happen to white label our service so we offer our booking engine to other rail operators.’ Over a quarter (26%) of trainline’s business comes from powering the websites and apps for eight train carriers.

Trainline’s legal work is heavily-based on commercial contracts and Murrin insists that they try to keep that in-house. He claims that 80% of the company’s legal work remains internal. ‘We’ll use external counsel for other areas of law that are outside our skillset or if we need to have a second opinion on something high value,’ Murrin says.

Trainline does not deploy a formal panel, but has established relationships with Travers, Fieldfisher and Kemp Little. Travers corporate partners Spencer Summerfield, Charles Casassa and Adrian West advised trainline in January 2015 when it unveiled plans to launch a £500m IPO. However, later that month, plans to float were shelved after trainline was sold to a different private equity house, Kohlberg Kravis Roberts & Co, in a deal valuing the company at around £425m-£450m. The business at the time was generating £107.4m in annual revenues. The company currently employs more than 500 staff.

On what he expects from his external counsel, Murrin notes: ‘We want people who understand challenges without having to reinvent the wheel. It’s also about relationships and trust, so often the firm we use is due to the team and the individuals there.’

In terms of major work highlights, he points to the 2016 acquisition of Paris-based Captain Train, which combined two of Europe’s largest digital rail ticket retailers. The buyout means that trainline customers can now travel the continent by train. Murrin describes the deal as ‘a great international acquisition’. He adds: ‘We now sell tickets on behalf of nearly 100 operators, both rail and coach. If you wanted to travel from Birmingham to Barcelona by train then you can now just buy that through trainline.’

Trainline’s app overtook its website in terms of visits a couple of years ago. Murrin says that mobile is the ‘perfect tool for travel’ and argues that buying tickets through trainline’s app as opposed to at the station saves half an hour of people’s time. He says trainline sold £2.3bn worth of tickets in 2016/17.

That said, Murrin concedes that the company’s biggest hurdle is challenging the status quo. ‘The reality is that over 70% of tickets are still bought at the station. That is the biggest shift we’re looking at: people moving to online.’

Reflecting that pioneering spirit, Murrin was one of the group of in-house counsel working predominately at fast-growth, technology-driven businesses that in 2016 set up the Disruptive GC network. Other members of the group currently include Uber Technologies, Made.com, LendInvest, Funding Circle, ASOS and StubHub.

Murrin argues that while trainline does not have a call on the pricing of tickets, the company has raised the awareness of booking in advance. ‘Ticket prices can be quite opaque, so we designed a price prediction tool that will estimate when prices will be going up. In that sense we’ve given transparency to people with the best time to buy a ticket.’

Certainly not unique to trainline, Murrin says that he and his team are currently focusing on the challenges of the incoming EU-wide General Data Protection Regulation (GDPR) regime. ‘We’ve had a great project team who’ve put us ahead of the curve. You can never be complacent, but we’ve got a really good plan in place and we welcome it as a company. We’ve always considered our customers as our lifeblood and believed in treating them well. GDPR is merely reflective of what we think should be done with people’s data anyway, so we’re a big supporter.’

Coming full circle to the original train pun, Murrin sums up the challenge of his role: ‘It’s working in a company that’s very agile within an industry that is less so. That is probably the biggest challenge, selling the benefit of what we do and how we grow. If you believe in how green mass transit is, it’s less polluting going by train than other forms. We believe that people should be travelling by rail and coach. It’s a matter of getting people to join us on that journey.’

At a glance Neil Murrin