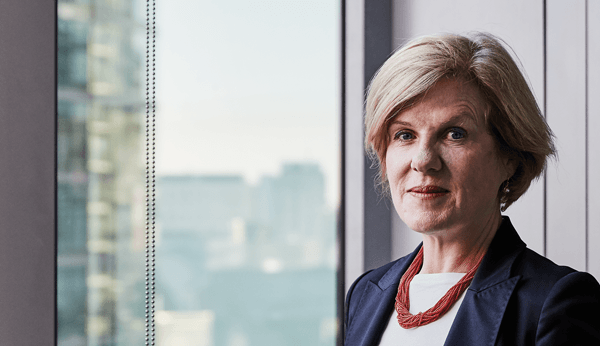 Living at the home of an ancient babushka. Rubbing shoulders with bodyguards on share acquisition deals. Arranging licensing deals so that The Muppets characters can appear on ice cream wrappers in Russia. ‘It’s been a fascinating and varied 25 years of practice, made deeply rich by the experience of different people and their different ways,’ Kingfisher legal director Elizabeth Messud says. ‘There has been many a modest cliff hanger in all I have done.’

That career has taken Messud from Toronto to a collective farm in rural Russia, to Moscow, then to London, via stints in Spain, France and Switzerland. It has also seen her work for one of the biggest companies in the world, Nestlé, as well as the finance arm of the World Bank, a Russian oligarch and, now, FTSE 100 retailer Kingfisher.

Messud’s colourful legal career began obscurely, with a masters in Slavic languages and literature in the early 1980s. This was to the despair of her father, who could not understand why she would want to study Russian in the Cold War era. ‘That finished in 1988, but I couldn’t find anything in Canada connected to Russia,’ she says. ‘I thought: “I’ve got to get a job”, so I went to law school.’

She began her legal career working for a judge in Ontario, followed by nearly three years in the corporate commercial team at Torys in Toronto. It was now the mid-1990s and her desire to get out of Canada and do something Russia-related was more realistic. That opportunity came through the World Bank and its International Finance Corporate arm, which was taking collective farms and privatising them in Russia. During this time she became fluent in Russian (she also speaks French).

Her time there reads like something from Tolstoy: ‘I lived on a collective farm in rural Russia in the home of an ancient babushka, where there was no running water. We wore the famous Russian felt boots, valenki, to cross fields knee-deep in snow to get to the main farm buildings.’

But she left less than a year later after being accepted on the Cambridge LLM programme, studying public international law, after which she joined Clifford Chance (CC) – and went straight back to Russia.

One memorable deal involved working with a group of Icelandic fishermen who came to Moscow to buy a fishing fleet. She recalls how the fishermen would not go home until the deal was done – Messud is not even sure if they booked any accommodation – meaning they worked around the clock. ‘It was the most extraordinary deal shape I’d ever known: they worked day and night and weekends until it was done. Literally. They just hadn’t alerted us to the fact that that was their plan before they arrived.’

I lived on a collective farm in rural Russia in the home of an ancient babushka, where there was no running water. We wore the famous Russian felt boots.

Messud was at CC for four years, during which time she had her two children, but moved in-house just after her son was born – when he was four-weeks old – having interviewed while she was pregnant. ‘Motherhood, as I conceived it, was not so compatible with private practice,’ she comments. ‘It’s a really tough choice. In-house, I’ve never felt that conflict between the job and being a mum.’

This was when she first joined Swiss multinational Nestlé and began a career that would span 14 years across Russia, Spain, France, Switzerland and the UK – spending much of that time as director of various legal departments. She says doing the same job in different jurisdictions taught her not only the differences between civil law and common law jurisdictions, but also the different ways people work. By the time Nestlé transferred her from Moscow to France, Messud had worked for more than a decade in Russia and done her ‘professional growing up’ there. She realised while many people are not happy with change, in Russia people had to be resilient because of the constant upheaval to their society at that time.

‘These are people that went to bed with a certain amount of money, they woke up and their lives were wiped out. That’s not a great thing to adapt to, but I do laugh to myself because I feel like if the Russians had to do Brexit, then trust me, it’d be done. I’ve learned that if you’re leading or managing something, you need to take time for change management.’

She ultimately left Nestlé to join the Swiss subsidiary of Russia’s Renova Group, a conglomerate with interests in many sectors, including aluminium, oil and telecoms, owned by multibillionaire Viktor Vekselberg. He was a controversial figure in Switzerland, courtesy of being the largest industrialist in that country, and Messud was involved in a public takeover bid for one of his Swiss companies during her 18 months there.

Her experiences as an in-house lawyer by this time had already been expansive: negotiations in Uzbekistan to get products in from Russia; working on counterfeits throughout the former Soviet Union; licensing deals for The Muppets characters to appear on ice cream wrappers in Russia; interviews with Russian criminal authorities for clients; and share acquisition deals with bodyguards around her at closing.

But then she went to Kingfisher, the largest home improvement retailer in Europe and owner of well-known brands such as B&Q and Screwfix. Messud joined as legal director in early 2017, shortly after the company announced its ‘ONE Kingfisher’ plan: a five-year transformation programme and restructuring expected to cost £800m, aiming to unify product ranges across the business, drive its digital capability and deliver operational efficiencies. The company has around 77,000 employees across 1,300 stores in ten countries, but ONE Kingfisher seeks to combine global functions, such as legal, to work alongside local companies in a bid to improve efficiency.

A transformation of the legal function’s organisation has been a priority for Messud since she arrived, creating a centralised and integrated legal function where previously each of the nine retailers Kingfisher owned had their own head of legal who reported through to the group’s chief financial officer. The new organisational design programme is gradually being rolled out, moving from a market-by-market legal structure to a single legal team.

At the same time, Messud led on a global panel review that completed in March 2018 with a total of 17 firms making the cut across Kingfisher’s jurisdictions. She says she is happy with her panel firms but believes the legal function is not yet utilising them efficiently – the company only managed to reduce its legal spend by half of what it had targeted in year one.

She says Kingfisher’s footprint appealed to her and believed her experience working in many of the same countries – although the company is pulling out of Russia, Spain and Portugal – would prove invaluable. French retail law, for example, is highly protectionist and regulated, only allowing for retail contracts to be negotiated between October and the end of March.

‘The gift of doing good legal work in a big corporate is to understand what the business wants to achieve and then to make the legal work or strategy fit for purpose in each of those jurisdictions where you operate, so that the structures you build and projects you complete will last. Your work has to stand the test of time.’


At a glance: Elizabeth Messud