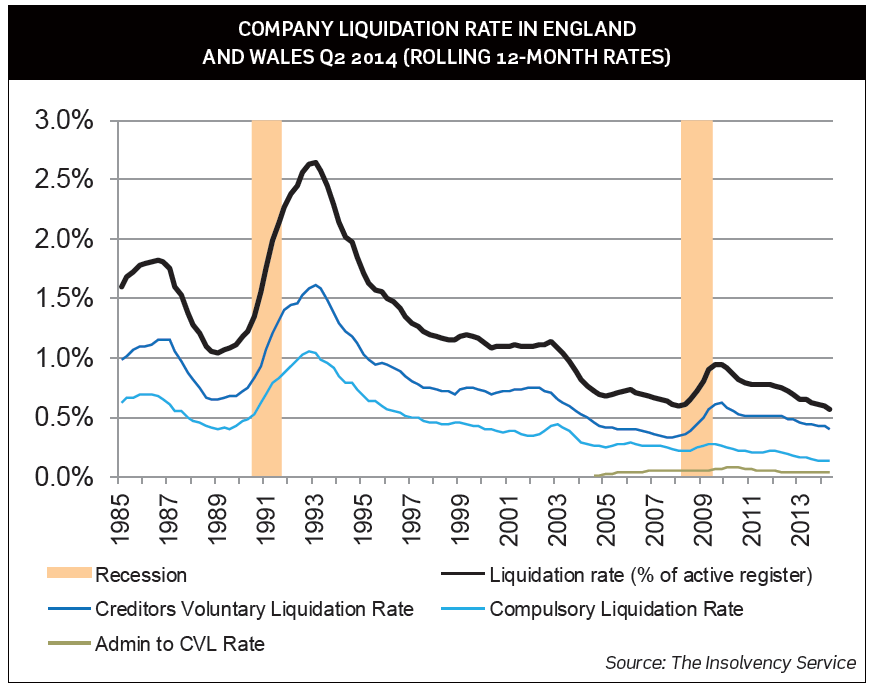 As daily news heralds the emergence of the British economy from the worst recession since the 1930s it may seem a strange time to suggest that companies should consider acquiring businesses from companies which go into an insolvency process.

However, looking back at past recessions shows that, apart from a spike of insolvencies when the recession first bites, the peak of insolvencies occurs a surprisingly long time after the economy has returned to growth. For example, the global recession is the early 1980s ended in the UK at the beginning of 1981 but the peak of company failures did not occur until 1985. Similarly, the UK economy technically emerged from a recession in the third quarter of 1991 but corporate insolvencies did not peak until the end of 1992.

Although making comparisons is dangerous because recessions are caused by different factors, it appears that the longer and deeper the recession the greater is the time lag following official recovery before the number of insolvencies begins to grow towards a peak.

Below is a table showing the rate of company liquidations compiled by the Insolvency Service from its own statistics and the records at Companies House. The rate of company administrations will generally have a similar trajectory and it will be noted that the peak following the 1990s recession can be seen. It is notable that despite the length and depth of the last recession the trend for all sorts of liquidation are currently at historically low levels and continuing to decline. Very few people in business expect the trend to continue and experts predict that insolvency levels will rise significantly. The only question is when. There are a number of factors which may contribute to a sharp rise in insolvencies. Interest rates are at historically low levels but, despite this, research by R3 (the Association of Business Recovery Professionals) paints a worrying picture should interest rates rise even to a modest degree. According to their research published in September 2014:

As healthy businesses begin to feel more confident and seeking opportunities to grow, banks and other creditors may feel that there may be a market for the assets of those businesses which are struggling and may be more inclined to take action rather than waive ongoing breaches.

Another risk factor for businesses which is often overlooked is that, when the economy picks up, some companies which have struggled during the recession may have insufficient working capital to support an increased order book. If customers of such businesses delay payment, such businesses may find themselves without the cash to pay their creditors and be forced into an insolvency process despite a healthier  order book.

For companies looking to grow by acquisition, an understanding of the insolvency processes and the opportunities (and risks) for potential acquirers is vital.

Since the 1970s, various governments have tried (and largely failed) to introduce an insolvency regime which preserves jobs and value from insolvent businesses. The latest significant attempt was introduced by the Enterprise Act 2002 which dictated that administration would be the process to be followed where it was considered that a viable business could be preserved.

Compared to a normal sale process, the opportunity to carry out due diligence is limited or non-existent and the administration sale agreement will contain virtually no representations or warranties which a purchaser would rely on in a normal sale. To reflect the increased risk, the sale price is normally significantly less than would be obtained through a conventional sale process.

Companies seeking opportunities to acquire from administrations would be wise to prepare by making sure that they have funding in place and to take over the running of the business.

When assessing the prospective acquisitions of a business through an administration, a significant factor is often the extent of liabilities that will come with the acquired employees. Changes have been made to the TUPE regulations (most notably in 2006) with the intention of promoting the ‘rescue culture’ by limiting the extent of such inherited employee liabilities, which were seen as a disincentive to potential acquirers. The amendments drew a distinction between ‘terminal proceedings’ and  ‘non-terminal proceedings’ so that, in general terms, where a business was acquired from terminal proceedings (which would include all liquidations) employee liabilities would be left be but, in non-terminal proceedings, the automatic transfer principle still applies with some exceptions such as arrears of pay or holiday pay for holidays taken (but untaken accrued holiday entitlements transfer). Perhaps rather unhelpfully, the Court of Appeal held in Key 2 Law (Surrey) LLP v De’Antiquis [2011] that administration (including those resulting from the pre-pack process) were non-terminal proceedings. As a result, seeking to limit the extent of inherited employee liability is often a significant element in negotiations with administrators or potential administrators in a pre-pack. There is a fine line between dressing up a business to make it look more attractive to potential purchasers by shedding staff (which are likely to be unfair dismissals) and making staff redundant for necessary cost saving reasons (which are likely to be fair). An understanding of the regulations and the parameters of what will be regarded as fair and unfair dismissals may result in a substantial reduction in inherited employee liability through negotiations with the administrator. There is also a limited scope to amend the terms and conditions of employment of inherited employees to align them with the terms and conditions of the purchasing business.

A good strategy to build business is to acquire the business of a struggling competitor and it is often the case that rumours circulate in an industry or business sector when a company is at risk. Picking up rumours and doing some discrete due diligence will put potential purchasers in a good position to negotiate with an administrator if they are going to be appointed. Experience shows that the following points will also help secure a successful transaction.

SIX TOP TIPS FOR BUYING FROM AN ADMINISTRATOR

Even a well-prepared purchaser and their team can experience some  unwelcome surprises and it is wise  to have a fire-fighting team on standby  to deal with the unexpected.

A good example of this is provided by a recent acquisition of a substantial hotel group from administrators. The hotels had continued to trade in the administration and as a result, creditors and suppliers were prevented from taking action by the administration ‘ring fence’. As soon as the sale was completed the ring fence was lifted and the protection lost. It happened that one particular high-rise hotel in the group had completed a full refurbishment of its lift system shortly before the owning company went into administration. Soon after the sale, the duty manager was pleasantly surprised when a couple of people from the lift engineers called to ‘carry out some checks’ on the newly refurbished lifts. He was very unpleasantly surprised to be told that the lift system had completely stopped working as the ‘helpful’ lift engineers had removed the vital control cards. The lift company had not been paid for the work and the control cards were subject to retention of title. Some frantic negotiations and a substantial payment were required to enable lift functions to be restored. Future visits from suppliers were treated with extreme caution.

Buying from administration can be hugely profitable, but, as seen from the ‘war story’ above, it may also be hugely risky. Wise buyers often form a new company for the purpose of the acquisition so as to limit the downside risk if it all goes horribly wrong.

The recovery of the UK economy is welcome news to all but, paradoxically, may also create the environment when company failures increase. The upside is that, in a more buoyant economy, there will be more purchasers in the market with the result that businesses and jobs may be preserved while providing purchasers with great opportunities to grow by acquisition from administration.