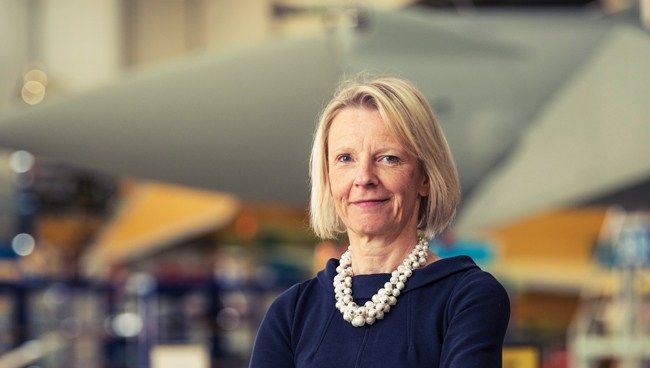 ‘My husband has virtually no understanding of what I do,’ admits BAE Systems Air chief counsel Julie Smyth. ‘He thinks I sit in meetings all day.’

Secrecy and security at the £18bn defence multinational is paramount. Its mammoth Warton airfield base, which dominates the village of the same name a short drive from Preston, is classified as a ‘List X’ site, meaning it can hold UK government information considered ‘secret’ and above.

This means you need your passport to get in, you cannot take photos and because an unnamed customer is on site the day The In-House Lawyer visits, a tour of the fighter jets there is cancelled. The interview with Smyth, who has a ‘very limited’ social media presence because of security, is not allowed to be recorded.

The demand for confidentiality juxtaposes with the high-profile nature of what BAE does, however. The London-based defence giant employs more than 80,000 in more than 40 countries, developing and making products across its air, maritime, land and cyber sectors. Air is about half of its business, headlined by the marquee Typhoon and F-35 fighter jets.

Being in the business of defence naturally draws detractors and critics. Early last year, for instance, two men broke into Warton in what they said was an attempt to disarm Tornado jets, protesting their use by Saudi Arabia to bomb Yemen. Both were acquitted of criminal damage after arguing they were acting for the greater good.

‘The elephant in the room is we make military products; we deal with very difficult issues,’ Smyth says. ‘A lot of what we do is high-profile, is on Radio 4 in the morning, and you have to make sure we give the right advice. My job is to make sure we comply with the rules and regulations that have to govern how we provide military kit.’

Smyth’s career began in intellectual property at Baker & McKenzie, but she quickly found she enjoyed working in industry following a secondment to the former telecoms regulator, Oftel. She moved to the northwest and worked at Eversheds briefly, before going in-house with BAE in 1998, just shy of four years’ qualified.

The elephant in the room is we make military products; we deal with very difficult issues. A lot of what we do is on Radio 4 in the morning.

BAE was called British Aerospace back then. Shortly after Smyth joined, the business, which until 1980 had been a state-owned company, merged with the defence electronics and naval shipbuilding subsidiary of the General Electric Company, GEC-Marconi.

The merger became BAE Systems, which covered land, sea and air, as well as adding a large footprint in the US market. Smyth joined the legal team in the military air arm, which at the time was only five people.

BAE restructured and created its Air unit at the start of this year, with nearly 2,000 roles cut company-wide as a result. Smyth is the chief counsel of Air, leading a team of 60 split between lawyers, export control, data protection and compliance. Most are based at Warton or Samlesbury, on the eastern side of Preston. The wider BAE legal team, headed by general counsel Philip Bramwell, is about 250-strong.

Some of Smyth’s work has included attending a Senate Inquiry in Australia on cabin air quality, working on the Nimrod Review – an inquiry into the crash of Nimrod MR2 in Afghanistan in 2006 – as well as complex contracts for the development of its new Hawk trainer jets and long-running work on Taranis, BAE’s unmanned combat aircraft.

Big commercial contracts for the sale of aircraft, which can take years to negotiate and be worth billions, also dominate the team’s workload. Smyth says when she first joined the company focused on contracts with the UK’s Ministry of Defence, but it is now increasingly dealing with foreign equivalents. Its key markets are the UK, US, Australia, India and Saudi Arabia, with each having their own, heavily regulated, import and export controls as well.

Smyth comments: ‘Because Air is half of the group, pretty much every large contract we get can affect the share price, and so you feel an extra responsibility. The implications of getting it wrong, in pretty much every aspect, are huge.’

The legal team tries not to outsource any of its ‘staple’ work on commercial contracts, although it will use external counsel for specialist or geographically-based advice. Preferred law firms – which again can require security clearance – Smyth uses include Eversheds Sutherland and Squire Patton Boggs in Manchester, as well as Freshfields Bruckhaus Deringer and Allen & Overy.

‘We know how to draft contracts for the supply of aircraft and their associated services better than most external law firms,’ she says.

Because Air is half of the group, the implications of getting it wrong, in much every aspect, are huge.

Bramwell requires monthly value-add reports from his legal team, which Smyth says has transformed the legal function. These demonstrate what the team has done differently or areas in which it has contributed to make the function more efficient and effective. Providing internal training, for instance, to keep the business aware of legal developments, risks and regulations so that it in turn generates less work for the in-house department.

All of BAE’s senior lawyers sit on the board or management committee of the respective businesses. Smyth comments: ‘Our advice is only as good as the information that we have. Sometimes our business needs to move at a pace that, ideally, we as lawyers aren’t comfortable with but you have to find a way to be agile and pragmatic. A business person doesn’t want to know all the ins and outs of a contract, they just want to know if they can do it.’

Her job has taken her to countries that she never thought she would visit, sitting across tables from foreign air force representatives during negotiations. Ever-changing regulations and geopolitical developments can be challenging, while everything BAE does is monitored and approved by the UK Government. Cyber security and data management is increasingly on BAE’s agenda, with any breaches potentially very serious.

Being at what she calls the ‘front line’ of the business in Warton, where staff regularly pop into her office on their way down the corridor, means Smyth pushes her team on its stakeholder management and getting to know their business colleagues. The idea is to make her team approachable enough that the company wants to come to them, rather than just needing to. She has visited most of the business, although surprisingly she has never been on a flight simulator.

‘Sometimes we do have to say no, but the key is to say: “We can’t do that now, but what about this?” Don’t get me wrong, that is hard to do, but you have to make sure you are trusted enough that they know you’ll work with them to find a solution.’

‘I’m immensely proud of the work that we do. We deal with incredibly advanced, complex products which even if you are not an aircraft buff, which honestly I’m not, I still find absolutely fascinating.’

At a glance Julie Smyth