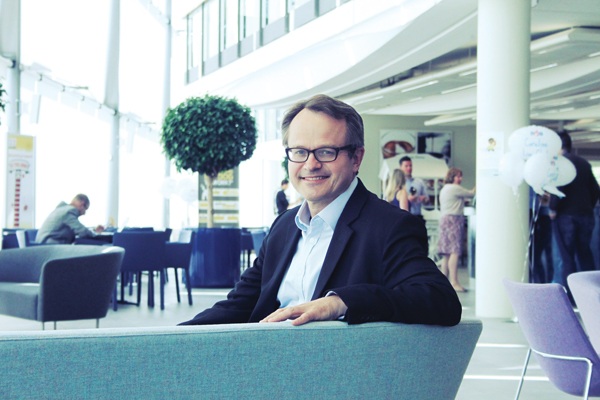 Unusually for the current UK and Ireland general counsel of Swiss multinational and famed KitKat creator Nestlé, Mark Maurice-Jones’ career started in teaching. Armed with a chemical engineering degree from the University of Cambridge that he was unsure how to utilise, Maurice-Jones opted for a year-and-a-half-long stint in Hong Kong teaching maths, physics and chemistry. But ultimately he found the pull of a career in the law more alluring.

Upon his return, Maurice-Jones studied a graduate law conversion course at what is now the University of Westminster. Starting training at Lovell White Durrant in 1992, Maurice-Jones qualified into the firm’s antitrust group in 1994.

In 1995 he joined Herbert Smith, spending four years in its well-regarded antitrust team. Once his legal career started, he never looked back: ‘I enjoyed teaching while I did it but it was something I did while I was trying to sort through my own mind what I wanted to do in life. I knew I didn’t want to be a chemical engineer but was always passionate about working abroad, and that was one of the reasons I ended up going in-house.’

Maurice-Jones’ first in-house role came at US multinational manufacturer Kimberly-Clark, where he would spend the next 15 years. As the leader of the company’s EMEA legal division, his bread-and-butter work saw him managing the team as it dealt mostly with disputes related to alleged misleading advertising.

His team also undertook the occasional piece of M&A work, including opening a factory in Moscow, where he had to manage remote teams in Russia and Ukraine. While he enjoyed the cross-border co-operation required to get the project operational, there were inevitably ‘significant challenges’, mostly from navigating the intricacies of the Russian legal system.

We’re selling products that stimulate debate and carry emotions with them. I see myself as a safe-guarder of reputation, not just a legal adviser.

And then there were less enjoyable challenges, particularly those involving restructuring the business. ‘Early on in my time there, Kimberly-Clark sold a lot of factories as the company streamlined its manufacturing portfolio. It was sad for the people who worked there but some interesting legal work came out of it.’

Eventually Nestlé came along with an offer too good to refuse. But having spent most of his career at Kimberly-Clark, it was not a straightforward decision to join the Swiss giant in 2015. ‘Kimberly-Clark had a very nice culture, a culture built around integrity and honesty. I made some very good friends but this opportunity at Nestlé came up and it seemed exciting.
The role was related, but not the same kind of industry and a much bigger company.’

The size of the company proved to be the most striking feature when he made the switch, noting that adapting to such a scale was a new challenge. ‘Who is everybody? How do you get decisions made? At Kimberly-Clark it was much smaller so you had a better handle on who the decision-makers were. At Nestlé that initially was more challenging because there are more stakeholders. But I didn’t expect things to be exactly the same so I just got on with it.’

However, he found his role changed. Not only was Nestlé larger than Kimberly-Clark, but it was also much more high profile. ‘We’re selling products that stimulate debate and carry emotions with them. Over the last couple of years we’ve been involved in debates around sugar content in chocolate and things like that. I also see myself as a safe-guarder of reputation, not just a legal adviser.’

Upon his arrival, the team at Nestlé was run on ‘legal specialisation grounds’, with staff working according to their own expertise. As such, there was a designated corporate lawyer, an employment lawyer and a property lawyer.

‘I’ve changed things to more of a business-partner structure. Each business unit was assigned a particular lawyer. Our confectionery business, that sells KitKat, has a confectionery lawyer. The beverages business, which sells Nescafé, has a beverages lawyer. That worked well because it meant the business had a one-stop shop, a person they could go to for advice.’

I don’t believe in squeezing law firms to the nth degree; it has to work for them as well.

The new model has received plenty of positive feedback from the company and despite making substantial changes, getting the team onside was not an issue. ‘I try as much as possible to involve the team in these kinds of decisions. We did some surveys, we asked questions of the business. The evidence pointed to needing a business-partner model. The team were part of the decision-making process so it wasn’t a big problem.’

In terms of his own reporting lines, Maurice-Jones answers to Nestlé’s UK and Ireland chief executive Stefano Agostini, but also has a dotted line to his Switzerland-based counterpart Trevor Brown, who acts as GC for Nestlé’s Europe, Middle East and North Africa business.

Describing a typical working day, he quips: ‘There’s always lots of chocolate involved.’ But in reality, he says he is relatively hands-off, stepping in to assist on the big legal issues but otherwise coaching, overseeing and delegating the day-to-day work to his team. Otherwise he is occupied with the UK and Ireland management team of which he is a member.

Advertising disputes have been keeping Maurice-Jones’ team consistently busy, but a standout piece of work arrived earlier this year when Nestlé revamped its pension management operations. The company rejigged its roster of asset managers for a number of pension funds as part of a wider company overhaul. He describes it as a challenging piece of work and ‘very high profile’.

In addition to his GC duties, he also acts as the company’s compliance officer. ‘It has let me help drive that culture of high values and ethical behaviour and shape the agenda of the broader business. We talk a lot about doing the right thing and having good behaviours, and I’ve spent a lot of time working on that. That’s been rewarding.’

In terms of external counsel, Nestlé has a formal panel arrangement in place. Historically, the company has turned to CMS Cameron McKenna Nabarro Olswang for complex advertising or intellectual property work, Eversheds Sutherland for employment issues and Linklaters generally advises on antitrust matters.

Maurice-Jones has a clear philosophy about what he expects from his external counsel, preferring to think of them as ‘just an extension of the legal department. I want them to feel like they’re part of the team. I want them to partner with me, with the business and drive optimal solutions’. He also expects firms to be educators, to keep the company up to date with relevant developments: ‘What are the laws that aren’t currently in place which people are talking about that could come in and affect us?’

Despite the demands, Maurice-Jones believes Nestlé should be equally pragmatic in external counsel relationships, especially when it comes to flexible fee discussions. ‘Of course, it’s something we talk about. I don’t necessarily believe in squeezing law firms to the nth degree; it has to work for them as well.’

The market has been challenging for Nestlé of late. The company has instigated a broad restructuring of its products and business model at a cost of £777m to counter poor sales. Increasing consumer demand for healthier food has forced it to look at the composition of its products, particularly the sugar content of its KitKat chocolate bars.

‘There’s constant thought about what goes into our products. We’re very conscious of what’s going on in the outside world. Obviously we have to keep up with the needs of our customers, that’s what we’re here for. As people’s requirements change, the business moves with them.’

Maurice-Jones finds that the most challenging aspect of his job is multitasking. ‘You’re juggling lots of balls constantly. On one hand you have to be a good legal adviser, you’re having to manage and motivate teams, you have to manage external counsel and try and keep costs to an optimal level. There’s so many different elements to the job.’

At a glance Mark Maurice-Jones