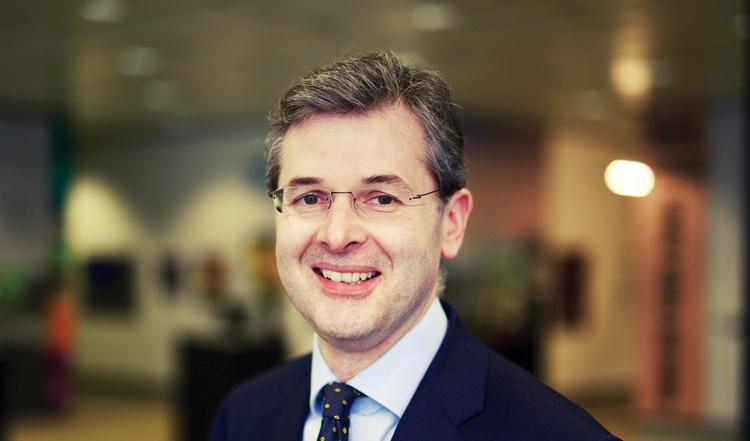 ‘Before university I spent a year working in India in a Tibetan Buddhist monastery, teaching English, maths and personal hygiene,’ Hugh Pugsley, general counsel for HSBC’s UK banking and insurance businesses, casually slips in at the end of the interview.

Although his days of reading the complete works of Hector Hugh Munro (‘Saki’) to indulge his love of travel books are behind him, he admits: ‘I still love being transported into another world’.

However, the path to becoming GC at one of the largest financial services groups in the world was more conventional. Having studied history at the University of Bristol followed by a law conversion course, he spent eight years at Allen & Overy (A&O), ultimately as a senior corporate associate.

‘I did a lot of work for Deutsche Bank and went on to do a secondment there. That made me think about life outside a law firm, because what was great about being an investment banker was having a chance to go in front of chief executives and chief financial officers.’

A year after his secondment, he left A&O to take up a position at UBS, looking after its strategic investments across Europe. Five years later and feeling restless, he landed a job at Lloyds Banking Group as head of its corporate legal team, looking after the bank’s disposals following its takeover of HBOS amid the global banking crisis in 2009.

He was then promoted to GC for group legal at Lloyds before moving to HSBC as GC for the UK in 2015. ‘I joined about four years ago and I’ve been really lucky that I’ve not gone looking for particular jobs and changes – they have just arrived at opportune moments and I thought the breadth of the role at HSBC sounded fascinating.’

Among the goals he has set for the legal team, simplifying whatever the bank sends out to customers is high up the agenda: ‘Our current account terms and conditions used to be 25,000 words and now they’re 8,000. They used to be written in a language from the 1970s – “thou shalt not do this” – and they’re now much more “we’ll do this… we’ll do that”.’

If you’ve had somebody who’s in-house for 20 years, how can you instruct a law firm properly? There should be much more toing and froing.

And a major five-year ring-fencing project, completed in July last year, saw the bank separate its retail banking operations from its wholesale and investment divisions, moving around 17 million customer accounts. The scheme was part of a number of reforms imposed on large UK banks by the government following the 2008 financial crash in efforts to protect customers.

‘Ring-fencing was a success in that to the man in the street nothing had changed, other than that they might have received a new card with a different logo.’

The HSBC project was so seamless it moved Sir Geoffrey Vos, chancellor of the High Court, to call it ‘a very good example of professional services of the United Kingdom delivering to an extremely high standard’.

He credits his predecessor at Lloyds, Kate Cheetham – now group GC – and former Lloyds GC Harry Baines, for letting him ‘crack on with things’ early in his career. However, he finds the collaborative style of HSBC particularly rewarding. ‘What I find particularly good is that I’m the UK GC here, but there are 12 or so other GCs for other large bits of the group. This means that there is much more ability to bounce ideas off my peers.’

HSBC works with ten law firms in the UK with a ‘good spread’, according to Pugsley, of Magic Circle firms and some firms with strong branches in Birmingham where the bank has new headquarters. He warns that having a ‘proper relationship’ with a firm is crucial because ‘there will come a point in any company or bank’s career where you’ve got a real problem and you need that law firm to answer your telephone call rather than somebody else’s’.

‘A mentor might be a peer or somebody only two or three years above you. If you’re 20 and you’ve got a mentor who is 50, how do you actually relate?’

Pugsley would not rule out a return to a law firm if ‘somebody gave me a P45’, but believes private practice can learn from the US model, which he says has more fluctuation between in-house lawyers and firms. ‘I don’t think you can be a good private practice lawyer if you don’t understand the pressures of a company and equally I don’t think you can be a good GC unless you understand the pressures of private practice, otherwise you become too siloed. If you’ve had somebody who’s been in-house for 20 years, how can you really instruct a law firm properly? There should be much more toing and froing.’

He recounts some meaningful advice given to him by an old mentor: ‘“Hugh, if I have to scroll on my email for the advice, I’ve lost it”. People still want clear advice and that’s where law firms still have lots to do, which goes back to my point about why the good partner in a law firm will only be really good if they understand what happens when a law firm’s piece of advice is translated by a GC, and where the law firm’s 50-page note is boiled down to a simple yes or no. Law firms are really not training their associates well enough about the importance of clarity and simplifying their advice.’

For Pugsley, having a mentor is not necessarily a matter of looking up to a more senior member of staff. ‘Often a mentor might be a peer or somebody who is only two or three years above you and that’s where you can really establish a connection, because if you’re 20 and you’ve got a mentor who is 50, how do you actually relate?’

He says being a GC is a privilege but concedes that the job is not for everyone: ‘The joy about being in this kind of role is the emphasis on constant improvement, which I appreciate isn’t for everybody.’

After all, on a day-to-day basis, ‘you’re only as good as your last meeting’, he says. What the role uniquely offers is the ability to gain a wide view of what is going on across an organisation: ‘Very few other roles in a company get that chance.’

But he adds that the skill of the job lies in a GC’s ability to understand where the pitfalls in the organisation are and identify where, ‘among all the noise’, the important work is. ‘It’s also about having that slightly independent view of what is important for the company and having the tenacity to say “actually, this is really important” and take it to the CEO or the board.’

Aside from helping the company simplify its services, Pugsley thinks back to his globetrotting days and wants to encourage his team – and remind himself – to have ‘more fun’ at work. ‘We have such a privileged job and I see so many fascinating things and yet I’m concerned that what people need to do is say: “Yes, that looks as if Hugh’s having fun.”’

‘Professionals have stressful lives. I’ve been thinking about simple things, such as not emailing people at the weekend because people might think that if they get an email from me they might need to respond straight away.’

At a glance: Hugh Pugsley