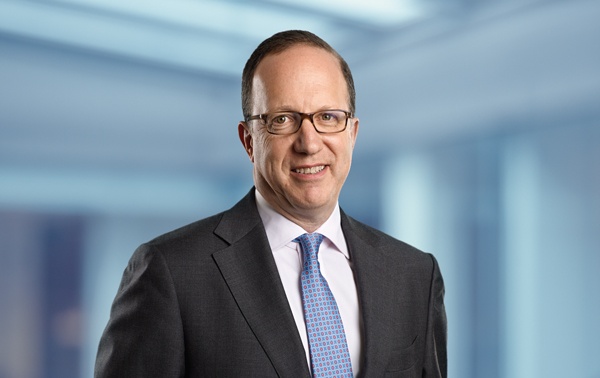 As a former senior staffer in the Clinton administration, David Fein has a tendency to chart his career and life against the backdrop of US politics. While working as a state district attorney, it was early in Barack Obama’s second presidential term that Fein found himself getting wistful for a new chapter, one that would see him become general counsel of the FTSE 100 banking group Standard Chartered in his first move in-house. ‘I wanted something new and so I thought something I hadn’t done was be a general counsel.’

While Fein was correct, his career up until that point had been interspersed with enough enviable roles to satisfy most lawyers. Starting out in the mid-1980s as a judicial clerk to US federal judge Frank Coffin in Portland, Fein later found himself working as a litigation associate at Debevoise & Plimpton. At Debevoise, Fein undertook white collar and First Amendment work, for which he says he always had ‘an affinity with’ at law school.

Despite spending four years cutting his teeth as a clerk and later as an associate, Fein says that he ‘really learned how to be a lawyer’ after becoming a budding federal prosecutor for the southern district of New York in 1989. ‘It was a fantastic office with tremendous talent. You’re on your feet in your first week representing the US government with your own cases in front of federal judges.

‘In my second month, I had my first jury trial: a complicated trial with federal narcotics charges, with conspirators and testimony. That continued and I ran through a number of subject areas there.’

He describes his tenure as a young prosecutor as ‘foundational’ and adds: ‘It really set my career forward, in terms of the skills I learned as well as the interest and passion for the subject matter.’

In 1995, the White House came calling. Fein was appointed as associate counsel to President Bill Clinton. He describes the role as a steep learning curve, but recalls his time there fondly. The highlight was helping to force through regulation to limit tobacco advertising that could reach children. As a result of the regulation, the six tobacco companies that had attracted the largest percentages of underage consumers at the time were obliged to run educational TV ads warning against the dangers of smoking.

Before eventually arriving in the UK at financial services giant Standard Chartered Bank in 2013, Fein spent 13 years as a white-collar partner at New York practice Wiggin and Dana, focusing on internal investigations and corporate compliance. He then spent three years as the US attorney for the district of Connecticut, his home state. He oversaw and managed all litigation the state government was involved in within Connecticut – civil and criminal.

He comments on his decision to take the Standard Chartered role: ‘My youngest was going off to university so it was an opportunity. We had been tied to Connecticut; we wanted to keep our kids at their high schools that they liked very much. This gave my wife and me the opportunity to cast our net wider. We had travelled a lot, but we had never worked or lived in a foreign country. I thought it would be a personal growth opportunity.’

Fein oversees a global legal team of 600 and manages three functions within the company: legal, company secretariat and shared investigative services. Since his arrival, Standard Chartered has undergone a transformation of its internal functions. He notes that Standard Chartered was one of the last major banks to have a unified legal and compliance team, but after a 2015 reorganisation, the two functions were separated. ‘Compliance is a massively important function. I often say it’s more important than legal.’

The legal function is dissected into three main parts, firstly by country and region, then by clients and products, and finally by legal specialities such as disputes and M&A. Standard Chartered has lawyers across 70 markets, with a substantial presence in Singapore, Hong Kong, Dubai, New York, London, Mumbai, Shanghai and Taiwan.

Fein describes his role as ‘varied’ on a day-to-day basis, but typically he spends a significant amount of time supporting the chief executive Bill Winters and his management team. ‘The board schedule plays a big role in my schedule.’ Otherwise, he is preoccupied with a multitude of matters thrown up from the legal function and advising his legal management team. He also dedicates substantial daily time to his open-door policy: ‘People often want to raise an issue or get advice. My days are filled with those kinds of important appointments.’

Fein presses his legal team to have close integration with what he terms the ‘internal client’. His lead employment lawyer, for instance, works closely with Standard Chartered’s human resources department. This method, Fein argues, enables his lawyers to have a closer understanding of the business and give ‘continuous advice’.

When discussing the differences in legal culture between the US and the UK, Fein cites a convergence in issues. Of the five major UK banks, he became the third American GC after Barclays and HSBC.

He cites General Electric as a major influence in the increasing global popularity of American in-house lawyers. ‘They really changed the nature of what an in-house team could do. They were almost a really high-quality law firm. That’s been a tradition in the US for 20 to 30 years.’

However, he believes the key reason he got the role with Standard Chartered is due to the longstanding American tradition of lawyers working in both the public and private sector.

He insists the UK lifestyle suits him: ‘I lived outside New York but went to law school in New York City. London satisfies that desire for what a big city offers. It’s very liveable but also vibrant and dynamic.’

In May 2017, Standard Chartered underwent a review of its external legal panel. The Magic Circle firms Slaughter and May, Allen & Overy, Linklaters and Clifford Chance made the cut alongside Herbert Smith Freehills, Hogan Lovells, Baker McKenzie and Dentons.

Fein says experience gained from working as a law firm partner for over a decade has given him a clear idea of what he looks for from his external counsel. ‘I want a trusted adviser who will live in our shoes and say: “We’re all in – representing you and you’ve got our full attention.”’ He emphasises that a firm needs to have a global presence, due to the far-reaching nature of Standard Chartered’s business. ‘Where possible I want to see a law firm handle cross-border work. Somebody that has a strong presence in our major hubs is really helpful.’

While he considers external counsel on individual merit, he is interested in more ‘tech-heavy’ providers that have ‘discovered how to deliver person power in a cost-effective way’.

What he relishes most about his current role is chairing Standard Chartered’s flagship philanthropic initiative, Seeing is Believing (SiB), a programme aimed at combating preventable blindness in Asia and Africa. As of 2016, Standard Chartered has raised $92.8m for SiB. Fein has been personally involved in a fund that has supported pioneering projects. One of these projects is a range of iPhone apps called Peek, which can identify visual impairment without the need for heavy equipment. There are different apps for testing different visual factors, such as colour and contrast. Peek is currently based in Kenya, but is expanding into Botswana. Fein and the rest of the Standard Chartered board went to Kenya in November 2016 to see Peek in practice. ‘People came for eye testing that day, a line that lasted the whole day. Every hour I spend on that is an hour well spent.’

Despite the breath of fresh air afforded by such initiatives, he notes that his job comes with severe demands. ‘I get up in the morning and I work before I come to work. I’ve got a lot going on in Singapore and Hong Kong. I come here for a full day in London; Hong Kong and Singapore close in the late morning, and then the US starts to wake up.

‘After a full day here I go home, have dinner and then there’s still a lot of hours left of New York time. That is an incredible challenge. If you’re someone who’s used to being responsive to people, there are too many opportunities to be responsive.’

As if to emphasise his point, Fein makes an apology so he can leave to attend another meeting. When hurriedly asked about his work/life balance, he smiles and says: ‘I’m working on that.’

At a glance David Fein