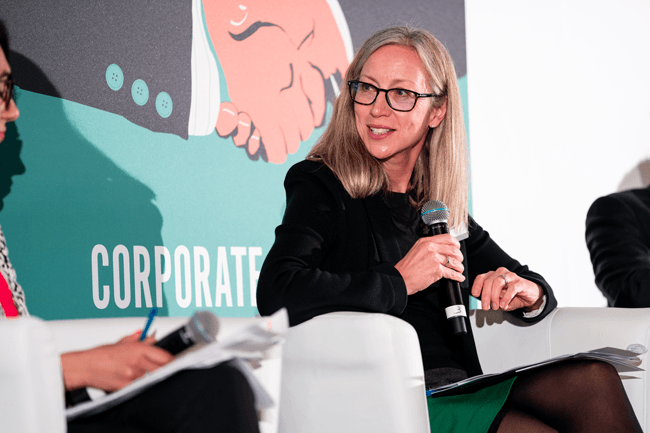 The final session before lunch in our Corporate and M&A Summit looked at the mechanics of auctions and how best to handle the competitive bid process from both the buyer’s and seller’s perspective. The session, moderated by co-chair of Greenberg Traurig’s global corporate practice, Fiona Adams, brought together panelists experienced in the auction process. Joining Adams was colleague Paul Maher, veteran corporate lawyer and vice chair of Greenberg, along with Jessie Gill, head of legal at Stemcor; Chris Hunt, group head of M&A for Rentokil Initial; and Nick Johnston, partner at Perella Weinberg.

Adams kicked off the core of the session by asking the panelists how sellers can successfully handle an auction process, to which Gill noted she could not over-emphasise the importance of an even-handed approach. Auctions are long processes and there is a need to foster a spirit of compromise: ‘Use up your currency when it matters and do not be a nightmare counterparty’.

Johnston and Maher agreed that the key elements are preparation and anticipation. Johnston observed that bankers get brought in at the ‘eleventh-and-a-half hour’, when there have been a number of conversations with prospective buyers that need to be unpicked. Maher added that he has seen sellers successfully use their advisers to help them by putting themselves in the shoes of the buyers, to try and work out what it is the buyers want and need to understand in terms of their own process.

He then added that the deepest pitfall for the sell-side to avoid in an auction is limiting the period of time that management is distracted and the potential downturn for the business as a result of talking to multiple parties. Johnston warned about the dangers of a late change of tack from the board that suggests it wants to do something else, which shows a lack of preparation and anticipation. ‘You are not listening to the buyer in that context,’ he said. ‘Any refurnishing of numbers, or changing the way the numbers are presented, or suddenly loading another £50m of costs in there, will make the buyers think, “Well, what are we buying?”’

More often than not, Johnston continued, the bank gets six-month feedback that the deal has been poisoned because the HR issues have not been resolved or people have promised things that they could never deliver on. ‘Both of those are not the buy-side’s fault, in many ways. It is the sell-side, for not getting that right’.

Gill believes there is a substantive role and value-add for the buyer’s lawyers in this scenario, because due diligence is seen as the very junior end of the transaction. She says auctions are a lot to do with gaming and strategy, but if you go back to basics, it is about putting your best foot forward early on in the process. ‘If you want to be seen as a good bidder, showing you have really thought about your price and ideally submitting that at the first round, and evidencing you are not a time-waster, is important’.

As a serial buyer, Hunt said the key strategies for success certainly involve price but reputation counts for an awful lot. ‘We have won auctions where people know that we are the best buyer and will deliver what we put on paper, and that counts. We have won head-to-head contests, and we have had discounts for buying off the back of that, in some markets.’

Terms are also important and a lot of damage can be done with a few swipes of a pen and this is about creating certainty with the seller and being comfortable around the issues a seller is going to worry about, such as antitrust and transfer risk. Another strong tactic, he says, is to take ownership of some problems and take them off the table. But it is also important to game the transaction every now and then. ‘We will ask horrible, unreasonable questions and just see what we can get, or we will look to tension a process, or we will look to walk away.’

Maher added that another mistake sellers often make is forgetting the lessons they learned in an auction as a buyer. ‘As a buyer, you spend a lot of time as an advisory group trying to work out who else is in the race, studying the behaviour of the people you are negotiating with, becoming completely paranoid when they are not available to meet you on a Wednesday afternoon because they might be speaking to somebody else. Sellers often forget those things. They assume that the buyer community has perfect knowledge.’

Adams asked the panel if they perceived any major differences in auctions in different jurisdictions, particularly in the US versus Europe. Johnston noted the clear differences in contracts and a number of times a deal has fallen over involving both US and European parties because there has not been a common language in terms of how that contract will end up being written. He added that there is always a tendency to believe that parties in the US are ‘a bit footloose and fancy-free, in terms of how they write their contract and what they will do to pay a price’ but this is not true – a bad deal in the US markets gets pummeled more than a good deal will ever get supported. The fluctuations of value creation and destruction are far higher on the other side of the Atlantic than they are in the UK.

One criticism of the UK market is that anything that is viewed as dilutive to earnings is therefore a destruction of value, regardless of what value might be created over time. ‘People think that the international M&A market is a uniquely unilateral market. It is not. People get involved in groupthink, thinking that it is. Hopefully your external advisers are the ones who are saying, “Hold on a minute. Stop.”’

To wrap up, Gill set out her definition of winning an auction: first working out if an auction is right for you. ‘If you are going to run an auction process with the view to winning it, first step is to work out whether you really need it and whether it is likely to yield a better outcome.’

Maher agreed that the key is to know your objectives and gauge the extent to which you can achieve those goals. ‘Auctions are capable of being value-destructive. It is not going to be so easy to sell that business in a short period of time because the bad smell around auctions that fail lingers longer than a failed bilateral deal.’