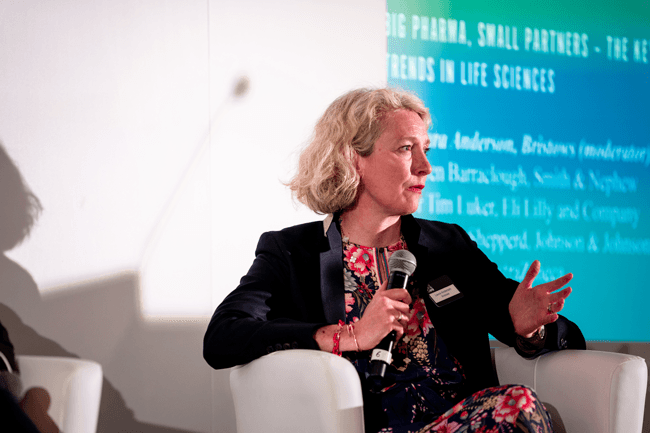 Given that mega mergers coming out of the pharmaceutical and life sciences sector have dominated the corporate agenda for decades, it was fitting that an afternoon session of our inaugural Corporate and M&A Summit focused on transactional trends in this area. Chaired by Laura Anderson, co-chair of Bristows life sciences group, it gathered a collection of in-house experts from big pharma.

Responding to a question posed by Anderson as to whether the spate of significant deals in the sector will continue, Dr Sahar Shepperd, senior legal counsel at Johnson & Johnson, pointed to his company’s recent $30bn acquisition of Actelion as a sign the pipeline for M&A deals in the sector is healthy, along with the recent acquisition of Shire by Takeda. ‘That deal was about accessing Shire’s rare disease portfolio. If you bring in an entire portfolio of assets into the pipeline, you have obviously done the maths and are mindful of the fact that that will generate revenue for the next ten years or so.’

Claire Solk, senior counsel in AstraZeneca’s corporate legal group, noted that in the pharma sector there is a trend of high-value deals that are essentially collaborations, such as AstraZeneca’s recent deal with Daiichi – building upon each company’s individual pipeline in oncology. Meanwhile, from a medical devices perspective, Helen Barraclough, associate general counsel of Smith & Nephew, said there are fewer traditional acquisitions these days. ‘Collaborations give you something that you do not have, and a chance to look at the technology of the future and enhance your medical devices. A lot of the deals that are happening might not be that big but certainly, in terms of the development of products, they are very exciting.’

Dr Tim Luker, vice president of emerging technology and innovation at Eli Lilly, added that this type of deal allows big pharma to keep pace with innovation. ‘These deals are about focusing your pipeline on where you think you are going to make money in the future. From an idea to making money takes probably more than 10 years, so inevitably things change along the way.’

Anderson noted the variety of deals in the sector was important rather than the scale and many of them are long-term bets. Barraclough added that the value on the intellectual capital of the people running start-ups or small companies is incredibly high. ‘Sometimes you have to look at different ways of partnering and structuring a deal so that you can make sure that you retain the people you need to, that you retain flexibility in looking at the project as a whole and not just as an acquisition and then an integration. It is looking at where you want to go with that technology, which may change after two or three years.’

Solk observed that initially small foundation deals may be embryonic in terms of pricing but can end up being the next blockbuster. Luker took this a step further, suggesting that these deals were more engaging in many respects than mega deals for the lawyers that work on them. ‘In early-stage deals, where you are taking bets that come to fruition in 10 years, there is a whole raft of different techniques we use to structure deals. Some companies need money now in upfront payments; some need research funding; some are worried about being paid back better later through royalties and milestones; sometimes we take equity positions in the whole company if we are not sure which area is going to come good. We have invested about $1bn in other people’s venture funds who are creating biotech companies where we have initially a small ownership position in those companies, more for relationships, and then ultimately they potentially turn into small collaborations and then ultimately turn into buyouts.’ Anderson asked the panel to list the differences they have found working in the life sciences sector as opposed to other industries. Barraclough felt the fundamental distinction is that innovation comes through collaboration and partnership. One person does not hold all the ideas and that requires long partnerships that can run for five or even more than 20 years before a product can be brought to market. It is often a long-term relationship that a contract has to live alongside and evolve with. ‘That is the real challenge we have, making sure that, as lawyers, what we are doing, as well as crystal ball-gazing, is setting up a framework by which the business can then live and breathe and which helps as opposed to hindering the collaboration.’

Solk notes that data is currently revolutionising the pharma industry. ‘We are used to saying that all of our assets are our IP, our antibodies, but it is not just antibodies these days; it is algorithms and data. One of the risks within legal that we need to manage is that we have some really valuable data that, as a business, we need to recognise is part of the crown jewels along with all the other antibodies and the IP that we hold.’

Along the innovation line, Anderson then pointed to another significant development for M&A in the life sciences sector – negotiations taking place between pharma and state healthcare providers or the big insurance companies. With some complicated and hugely expensive products, deals are being put in place more on a pay-for-performance basis – ie, suppliers of an expensive drug only get paid if the patient responds well to the treatment.

Rounding off the discussion – as the panel talked about their favourite deals of recent years – Barraclough stressed again the attraction in the smaller deals where the lawyer can see the value that they bring to the transaction. ‘A lot of the deals that I did in emerging markets were my favourites because they had a real personal element to them. It was not just a load of people fighting over various assets; you felt invested not only in the deal itself, but also the outcome.’

Solk agreed: ‘Some of the real value – and this is one of the joys of being in-house – is that you live and breathe the deals. There is a long-term relationship and a collaboration there and you are working through five or 10 years of collaboration to get something out at the end of it that helps people and saves lives.’