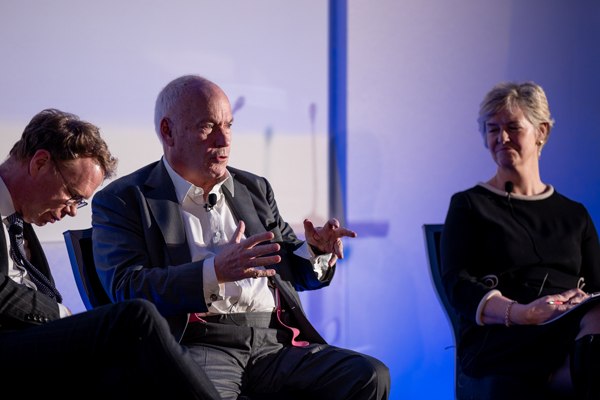 One of the set-piece debates of day one of Enterprise GC covered a pressing issue for GCs – how to widen their skillset by gaining board experience, as well as practical tips on becoming a non-executive director (NED) in particular. The session, chaired by veteran City columnist James Ashton, featured some seasoned campaigners: Michael Coates, associate general counsel for Shell UK and a director for a number of Shell companies; Eversheds Sutherland partner Denise Jagger, who has a portfolio of non-executive directorships and trustee roles; Stuart Morton, head of the legal and professional services function at executive search firm Odgers Berndtson; and Rob Webb QC, now a senior adviser at Brunswick and former general counsel for both British Airways and Rolls-Royce, who has held a number of board roles throughout his career.


Ashton began by asking the panel what advice they would give to a GC who has not yet got a non-executive role. Jagger said the key was to consider a NED role early in your career. ‘Too often I see people wait – whether it is retiring from the GC role or retiring from a law firm partnership – and then start to look.’

Coates said GCs also need to be clear with themselves about the reasons they want a senior outside role. Some people want to want to be in the limelight; others want to contribute generally. Some want to work for charities. Many do not take on these roles for financial reward but for broader career fulfilment. Jagger says she does some plc work, for which she receives a NED fee, but also has three roles for which she does not get paid anything.

‘I do it because of what I get out of it but for anybody starting out it is a Catch-22. You have to have experience to get a role and it will usually be simpler to get a not-for-profit or charitable role. Do not do it because you think it might be easier; it is just as challenging and rewarding. That is where you can really leverage your skills, because there is no way many charities could afford a general counsel. It is easy to make a large contribution.’

With lawyers bringing an abundance of skills to the table, Ashton then asked why there are not more lawyers on boards. Morton suggested it is a perception issue: lawyers are not generally regarded as numerate, unlike CFOs, while chairs are worried about companies being over-lawyered.

But if a GC does make it onto a board, how ambitious should they be? Webb said general counsel by and large do not become chief executives and that is one of the reasons they are popular. ‘The CEO never trusts the CFO because they know that the CFO wants their job, whereas the general counsel probably has got as far as they are going in that organisation. If you look at general counsel who become CEOs, it has not been a fantastic history.’

Coates countered that this was a misperception of lawyers, as some English law firms, for example, are the most successful businesses in the world. Morton said the problem is often that lawyers do not promote inherent commercial skills. ‘Often they come to us saying, “I want to do something”. Fine, but stop talking about the M&A deals you did; talk about your leadership capability. That is what a CEO does.’

Ashton then made the point that GCs could gain relevant experience by taking on more responsibility within their own companies rather than going for director roles at other organisations: ‘Being a GC++ within a company can help to make you more employable.’

Jagger elaborated on this by suggesting lawyers can be their own worst enemies because they tend not to volunteer unless they feel 100% qualified for the job. This gave rise to the suggestion that lawyers, to make progress in director roles, have to be almost ‘unlawyerly’. Morton said this issue relates to a question that GC candidates are often asked now when being interviewed: ‘The CEO says, “What’s your contribution to my exec committee beyond being my lawyer?”, and that is often the most decisive thing for you getting that job.’

She added that there are very clear specifications now for non-execs. People are doing board-skills matrices; they know where the gaps are on their board. ‘It is no good just going in and saying: “I’m an all-round good person. I’ve been around boards for a long time”. You have to know what you are selling and that you will fit within that diverse group of skills.’

Within that, it is important to recognise that companies are not going to have two of the same type of people and skillsets on the board. ‘That is why you have to look at the job specification and see they are getting more and more discrete, even for NEDs, whereas in the past they were not,’ concluded Jagger.

Morton agreed that someone from a GC background has probably one or two non-exec roles they could fill, not just any position. Shareholders will probably not wear a lawyer chairing the audit committee, for example. He added that the investor-stakeholders are unlikely to be very pro-lawyer either.

To close the session out, Ashton asked the panelists for one final piece of advice that people in the audience could follow now to help broaden their career horizon and get them thinking about other opportunities, whether inside their company or outside.

Coates re-emphasised the need to be open-minded: ‘Reflect on why you want to do this and what your skillsets are’; while Morton echoed this, adding a practical action point: ‘Go home and write your hypothetical CV exactly the opposite way around: not what you have done but what do you bring? What are your inherent skills and how would you talk about them?’

Webb concluded: ‘I would say get humble, get out there. Do not make people guess what you want. Tell them. Do not be frightened of rebuffs because there are going to be a few. Just go to the headhunters and say, “Do I look useless to you?”’

Most important, Jagger said, is very honest self-analysis. ‘Do not just default to a board position because you think that is the status position. There are many other really interesting things out there. Do not discount not-for-profit and charitable things as well because you could find that really fulfilling. In the end, it may well be a stepping stone to a FTSE role.’