In order to merge well, one must merge wisely. This requires the application of a two-step approach: First, a methodically conducted preparation of the filing by close interaction with all parties involved (both on factual and legal grounds), and secondly, a notification procedure which is handled in a responsible, transparent and trustworthy manner vis-à-vis the respective authority.

The notification procedure, contrary to common misperception, is not a one-way street. In fact, finding the golden mean between the interests of the parties involved and the merger control mandate of the relevant authority has proven to be a key factor for both an efficient and successful merger control outcome. Having said that, Haver & Mailänder is proud to have a global success ‘clearance-rate’ of 100%.

The preparation of the filing as well as the method of filing depends very much on the proceedings of the respective authority, but also on soft factors applied by the authority dealing with the specific application for merger control clearance. Based on our experience, we can present some general aspects and differences between the authorities as follows:

The German Federal Cartel Office (Bundeskartellamt) has been the esteemed counterpart throughout Haver & Mailänder’s merger control experience of more than 50 years. As a result, we have gained a deep understanding of the authority’s internal workflows in all phases of the notification process, and also its general approach with regard to complex mergers that raise exceptionally difficult legal and economic questions and competition concerns. Given the mostly global business activities of our clients, we are naturally also experienced with the procedures of the European Commission and other national competition authorities worldwide.

It is safe to say that the Bundeskartellamt is one of the most experienced authorities in the field of merger control worldwide. This is hardly surprising, given the constantly increasing caseload the authority is faced with. In 2018 the Bundeskartellamt was notified of more than 1,300 mergers. However, the vast majority of cases are generally cleared within phase one of the notification proceedings.

Compared to other jurisdictions, the German Act Against Restraints of Competition (Gesetz gegen Wettbewerbsbeschränkungen – GWB) provides for relatively low turnover thresholds. The concentration must be notified if in the last financial year prior to the completion of the transaction the combined worldwide turnover of all participating enterprises exceeded €500m; one participating undertaking had a turnover exceeding €25m within Germany; at least one further undertaking had a turnover in Germany exceeding €5m; and the de minimis exemption does not apply, ie participating undertaking which is not a group company that has sales of less than €10m.

The filing of a merger control application with the European Commission requires a different approach. This is essentially due to a more formal and more complex approach to a merger case taken by the European Commission. It is important to make the client aware of the specificities of the relevant forms and of the psychology to be dealt with in the relevant matter. An open and transparent approach also addressing potential concerns about compatibility is helpful, especially in difficult cases. It is an issue of fine tuning at which point in time in the proceedings these issues may be addressed.

One of the challenges in merger control in multi-jurisdiction filings in Europe very often is the decision to have the case referred to the European Commission, if that is possible, or to have the case decided by the relevant national authorities. It is one of our assets, also in the co-operation with reliable partner firms in various jurisdictions, to be able to anticipate problems and certain jurisdictions which may make a referral strongly advisable.

To co-ordinate a multi-jurisdiction filing on several continents is probably the most challenging task for the counsel responsible. The parties may very often neither have the required patience nor the sensitivity for national competition authorities and their internal rules. Psychology, especially with ‘young’ and ambitious authorities, is required and the client has to be trained to live with certain aspects which the client is not familiar with from a German or traditional European perspective.

The issue of joint ventures has to be dealt with in practically all jurisdictions which provide for rules requiring the filing of a transaction for merger control clearance. At least in the European Union, the rules are essentially based on the provisions in the Merger Control Regulation and in the Consolidated Notice on Jurisdictional Issues. However, there are different approaches, one of them can be found in Germany. One of the most important tasks is to distinguish which arrangements related to a joint venture are covered by the clearance and to which extent there may be doubts with the authority as to the compatibility of agreements which are not covered by the clearance. In each single case, it is important to advise the client of the scope of the clearance and of remaining risks. In rare occasions, it may even well be the case that the authority would clear the concentration as such but would start investigations under the relevant provision on the prohibition of agreements restricting competition.

Our clients – our expertise

We are fortunate enough to render our services to a variety of clients ranging from publicly-listed groups of companies over family-owned mid-size companies to self-funded start-ups and individual entrepreneurs. It has always been a priority for Haver & Mailänder to offer high-end legal advice, however comprehensive in nature, comprising both tailor-made strategy and entrepreneurial empathy.

Our expertise covers all aspects of German and EU merger control, ranging from strategic assistance in the initial stages of investment decision making, the bidding process and the signing of the overall deal, through the pre-notification discussions and the filing procedure (both in different jurisdictions simultaneously if necessary), and potential post-clearance complexities. 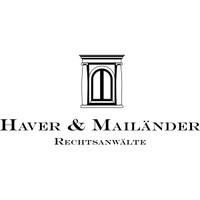