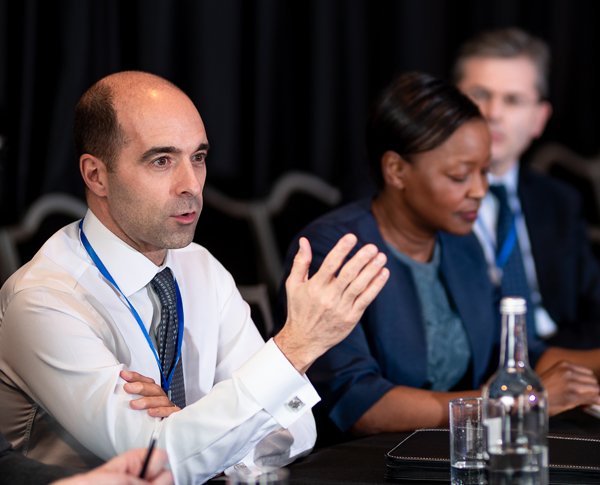 
Greg McEneny, GC of the non-ring-fenced Lloyds Bank Corporate Markets, kicked off the discussion by considering the change in skillset brought on by post-financial crisis regulation: ‘I used to think of myself as a transactional lawyer but now I very much see myself as a regulatory lawyer.’

In particular, he noted the sheer pace of that change: ‘When regulation came out ten years ago, you had a lot of time to build up to it, maybe two to five years before it was implemented. The time horizon to sort ourselves out for Libor, for example, is a year. Lloyds is a super tanker, so it’s difficult to turn quickly. All of the different regulation that has come into play has improved our agility and ability to react.’

Hugh Pugsley, legal chief of HSBC UK, has also seen the positive effect regulation has had on his organisation. He noted that his legal team has taken on greater responsibility within the bank, especially as it struggles with the many different (and sometimes contradictory) requirements imposed by regulators. ‘We’ve developed a role as advocates for regulators. They want banks to be operationally stable but putting us through so much regulatory change can do the opposite. On one hand they want to protect customers and clients, but on the other they want to push through major structural changes. As GCs we have to navigate through those very difficult waters.’

Noline Matemara, TLT partner and panel moderator, suggested that the GC role had changed as a result, from giving straight advice to boards to ‘handholding’ their respective organisations. Simon Croxford, EMEA and investment bank GC for UBS, emphasised the sheer range of stakeholders the bank has to take into consideration. In the UK alone he counted five, the Competition and Markets Authority, the Payment Systems Regulator, the Prudential Regulation Authority, the Financial Conduct Authority and, ‘increasingly’, the Treasury select committee. Croxford said: ‘They are all conflicting. Open banking totally conflicts with stability of systems and safeness and integrity of payments. There’s an inherent tension there.’

McEneny supported this assessment, and reflected on the change in advice he has given over the years: ‘There’s such a drive for transparency and good conduct. It’s not about legal rights, it’s about how we’ll look if we exercise those rights. You’re having to handle two things: driving the business with good, enforceable legal positions, but also having to recognise the environment you’re in and advising the business on a range of possible solutions to the problem.’

Dean Nash, chief legal officer of online bank Monzo, reported that the diversity of stakeholders was a particular issue in his high-growth start-up. He said: ‘It’s about three main things: competition, consumer protection and financial stability. We hit the objectives on competition and consumer protection. Financial stability, less so. We’re a start-up, we’re inherently unstable. It leads to diametrically opposed conversations between the Treasury and the Bank of England. Legally navigating those nuanced discussions is quite interesting.’

A prominent topic of discussion was the Senior Managers Regime (SMR), regulation aimed at increasing the personal accountability of senior individuals in the financial services industry. Of particular interest was recent news that the FCA is considering exempting heads of legal from the SMR.

Nash observed: ‘You could hear the whoops from Chancery Lane. I’m unfortunately already in the SMR. I’ve had to tell the general counsel we’ve just hired, who reports into me, not to come to me for advice. I don’t want to give it, because I’m bound by SMR. I refuse to give privileged advice.’

The panel also considered the ‘crystal ball’ problem the SMR would potentially pose, as the regulation states you must disclose anything that a regulator may reasonably expect.

As Matemara concluded by asking the panel on how to prioritise the differing interests of the diverse group of regulators, Pugsley quipped: ‘It’s a very quick conversation if you go to a regulator and say you’re going to prioritise someone else’s piece of work.’ He argued that financial services institutions should be lobbying the regulators more to have ‘some sort of industry air traffic control system’ in place, working with government or public affairs about what the key priorities are for the sector.

He added that a deluge of regulation is harmful: ‘I worry about the amount of effort and work large organisations put in. How can smaller banks comply with all this different regulation?’

Nash argued that forcing conventional banks into innovative compliance is stifling competition. ‘We would be delighted if there was no regulation forcing people to improve their offering because then our better offering, we hope, would really stand out. We find ourselves saying: “That was our USP, but now Barclays are doing it because they have to!”’

One key aspect to engaging with the regulators, noted Croxford, was empathy with their position, especially after they have been repeatedly asked what they were doing in the lead-up to 2008 in monitoring the banks. As a result, they have had to get tougher and they have had to impose more regulation. Nash agreed, adding what is easy to forget when talking about the regulator is there are individuals on the other side of the fence who have their own stresses, pressures, bosses and so on. ‘We have had to get to grips with that quite quickly and now we try to approach our regulator engagement from a position of empathy.’

The discussion then turned to operational resilience, which Nash noted is Monzo’s number one priority in terms of engagement with the regulator, particularly as a new bank: ‘They are looking at this Cloud-based bank, thinking: “What level of assurance do we have that you are not just going to fall over overnight?”. There is a huge role for a legal team and the GCs to play. It might be unique to an organisation like ours which is very tech driven. The key is to translate a lot of that stuff around operational resilience from the tech folk into things that the board and the regulators will understand.’