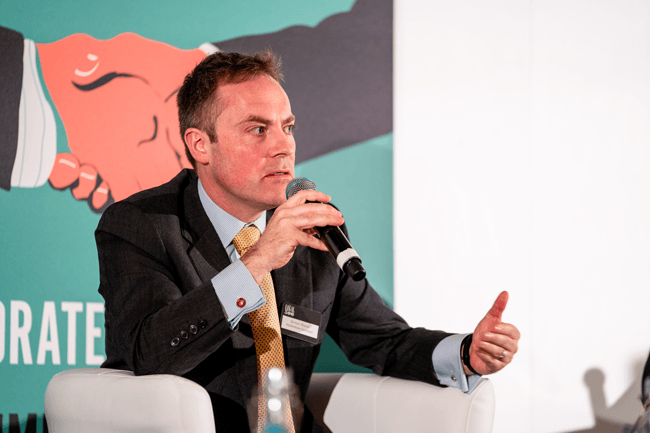 It was fitting that one of the first morning sessions of our inaugural Corporate and M&A Summit dealt with arguably the trickiest period of any public M&A deal – the first week, and specifically critical initial dealings with the Takeover Panel.

Introducing the topic, moderator Simon Wood from Addleshaw Goddard – who spent two years on secondment with the Takeover Panel – said: ‘A bit like with Charles and Diana’s wedding, it sometimes feels in an M&A transaction that there are three parties, and that third party is the Panel.’ However, he stressed it is not a regulator to fear but a well-respected organisation that encourages consultation and is relatively easy to deal with.

Wood then turned to Nick Ivey, a lawyer who joined Rothschild from the Takeover Panel, to ask how soon an investment bank would encourage their client to engage with the regulator, to give the Panel a call as soon as something comes on the books. Ivey said that typically a bank would do that early on unless the client does not want to engage. ‘The reality is that all you are doing is pre-empting a call that you are probably going to have to make in due course anyway, because of a price movement’.

Neill Hanlon, head of the EMEA investment banking legal team at Bank of America Merrill Lynch, added that this chimes with his own experience and the trick is being proactive and approaching the Panel first. ‘Some clients need education that the Panel is not a leaky regulator but a friendly regulator. There is very little downside in going to them. Some overseas clients have different experiences with regulators and need persuading.’

Giles Distin, an Addleshaw Goodard partner who also spent time on secondment to the Panel, said it is a judgement call how early to contact the regulator because, if you’re acting on the bidder’s side, there will be an assumption that there is active consideration. Ivey agreed that this was an important point because the Panel will ask what the date of first active consideration is, and it cannot be a date plucked out of the air; it has to be defendable when there is an event.

Samantha Thompson, head of legal M&A at Anglo American, talked about the pitfalls of being an offeror in those early stages, particularly because you have the announcement responsibility and can fall in to danger if someone in your organisation goes too far in talking to the market. ‘It is that point between active consideration and before an announcement goes out. It is the communications and the governance around communications and the training and making sure that the people who are responsible for running the deal internally have cracked open the Takeover Code or had some guidance on what impact talking to the market can have on the deal. That is a pitfall that I have seen happen, and it is important to get that right.’

Wood then turned to Hanlon to talk about the importance of clarity between the offeror and the offeree when making an approach, with the investment banking man noting that there is very little guidance about how you make the approach in the Code. By having made an approach to the target, the target is then aware of the bidder’s presence and at that point the burden of monitoring the price and monitoring speculation in the news and deciding whether there is an obligation to make an announcement shifts to the target. However, if the bidder makes the approach and the target unequivocally rejects the offer – which they may do tactically – that then puts responsibility back on the bidder. If the bidder’s advisers and the target cannot agree on whose burden this is, the Panel must decide because it is absolutely imperative that the parties know who has responsibility. In fast-paced transactions if there is a leak, the share price runs away very quickly. One of the key concerns that the Panel has is to prevent false markets, which means it wants announcements out as soon as possible following the decision that there has been a leak, and half an hour is expected. It is then important to know who is on the hook for making the relevant announcement at the relevant time. Once the parties are into discussions on an approach, all the rules of the Code trigger and lots of different people need to be particularly concerned about it. With this in mind, Wood asked the participants for some practical tips on what should be at the forefront of a board of directors’ minds when they start engaging on a public bid.

Thompson said the point about communications and clarity of messaging is important in identifying who is allowed to speak to the press and making sure all questions are directed to those individuals. It is also important to have clear governance and everyone up to speed with their obligations under the Code. Dealings need to be checked and the lawyers on the other side need to be known. ‘Concert parties need to be identified if you’re in a large group and whether they have done anything that could impact on the deal. Keep the insider list of who needs to know about the deal as small as possible.’

This brought the conversation towards making leak announcements, a particularly sensitive area and one that can land parties in hot water with the Panel. Ivey stressed the importance of acting swiftly and making a short announcement that all parties can agree on quickly, rather than dragging out a debate over a longer-form announcement. Distin added that the Takeover Panel is not going to wait for five or six hours for you to be able to reconvene a full board meeting. ‘It is going to get very upset if you say that you do not have your internal authorisations in place. Alongside that, is really important that you have a clear authorisation in relation to who can release that announcement.’

The last topic of particular importance was the regime governing an offeror’s intentions for a target company’s business and why it should be high up the agenda for both parties, because these are the types of issues that the press and politicians often pick up on.

Ivey concluded that the Takeover Panel deputy director general Tony Pullinger has gone on record to say it has no desire to decide on the ‘should’ of the politics of takeovers. ‘It is something the Panel does not see as its role and it would like to keep it that way.’