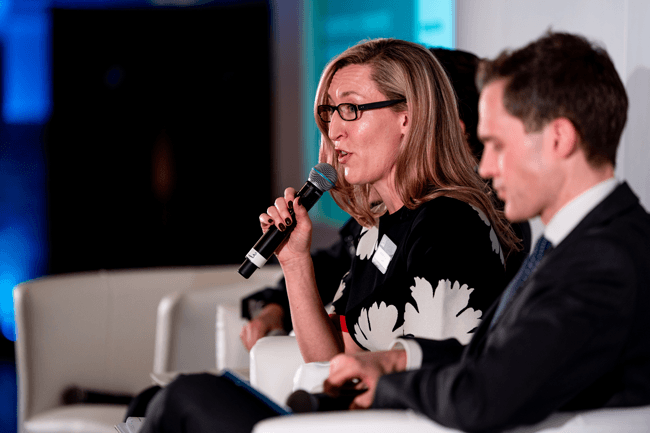 A key morning session of our 2019 Corporate and M&A Summit saw Linklaters London competition head Nicole Kar chair a lively debate between two authorities on European competition law and policy and its effect on M&A. On one side was economist Dr Claudio Calcagno, a vice president at Analysis Group and an expert in the competition arena, while on the other side sat John Gray, partner at Finsbury and head of its competition practice, who focuses on public affairs aspects of merger control cases, both in the UK and the EU.

Kar introduced the topic: ‘If you ask many general counsel what keeps them awake at night on a big deal, they will say: “Whether we are going to get clearance and at what price”.’ Set against this, she observed that competition policy is undergoing an existential crisis. Two pressure points are causing this, namely a narrative among competition agencies and policymakers that competition policy should take account of wider social objectives alongside a defining philosophy that big is bad; and the general sense that major corporates wield too much power.

This is causing significant push-back from agencies on large deals, so more fines for failure to disclose information in the context of merger reviews and other procedural violations, such as implementing deals before the deal has been cleared. Politicisation and public concern has led to significantly greater intervention rates on deals on competition and national security grounds. In the last five years, according to Kar, deals being blocked or remedies being required have gone up 5-10% in the US, 25% in the EU and 5% in China. In 2018, which is largely seen as the high point of the last decade, 29 deals worth €46.3bn were blocked or abandoned due to antitrust concerns.

The discussion turned to specific cases that underline such concerns, such as the EU’s decision to block the Siemens/Alstom merger. This gave rise to the idea that a competition regime should not get in the way of creating European champions to take on, in this case, Chinese competitors. Said Kar: ‘This is a ridiculous decision, where the Commission has been blinkered and looked at very narrow markets; a terrible outcome.’

Calcagno, in outlining the case, noted that while the European Commission and national competition authorities raised concerns about the proposed merger harming competition in European markets – which no remedies offered by Siemens or Alstom could overcome – the Commission did not consider Chinese competitor CRRC, the largest train maker in the world. The Commission said it had considered CRRC but that it was largely inactive in European markets and was considered unlikely to be in the future. This has raised all kinds of debate about competition policy damaging global competitiveness, to the extent that practitioners have started suggesting other tools, rather than antitrust policy, to encourage European competitiveness abroad. ‘This is probably the one case where I have seen very strongly the antitrust community, both lawyers and economists, against this swathe of political meddling,’ he said. Kar pointed out that an open letter has gone out from a number of practitioners, economists and lawyers, supporting the Commission’s approach in this case.

Attention then switched to another recently blocked deal, with the dust settling on the UK Competition and Markets Authority’s (CMA) decision to reject the Sainsbury’s/Asda merger, which Gray noted is by far the highest-profile transaction the CMA has considered, and also one of the most prolonged. He also acknowledged the criticism of the review not being done entirely on the competitive merits of the transactions and the emergence of new theories of harm in the process. There was also the political issue of the Secretary of State writing to the chief executive of the CMA before the transaction had even been notified, offering views on what the merger review should consist of. ‘It would be hard not to have some sympathy with those commentators who have said this merger may not have necessarily been judged on its competitive merits.’ He added that the Kraft/Cadbury deal in 2010 was the catalyst for this meddling, when politicians realised they had no direct say. ‘That is potentially a reason why things may change, but while the regime is in place, you have the bully pulpit. Every high-profile transaction has almost certainly a select committee hearing. It has no statutory powers whatsoever, but the ability to terrify chief executives and potentially to force commitments of various kinds out of them. That is now a fairly informally established part of the process.’

The other type of transaction gaining interest from competition agencies and politicans are digital acquisitions, such as Facebook acquiring WhatsApp. Calcagno said this was another example of policy creep and the concern in this case is one of potential under-enforcement, specifically of big market players acquiring smaller players to remove competition – seen also in Facebook/Instagram, Apple/Shazam and PayPal/iZettle. The iZettle example is notable, given that the smaller Swedish company had been mooting an IPO before PayPal came in with an offer substantially larger than was predicted to be raised in the IPO.

These type of digital ‘killer’ acquisitions have, according to Calcagno, led commentators to propose the so-called ‘balance of harms’ test, where a regulator should try and anticipate the magnitude and likelihood of harm and then block a merger when this is expected to bring more harm than good. However: ‘The CMA has already responded to that paper, saying that this is not a good idea.’

Given the charged political environment, competition authorities believing they may not be overseeing a regime that works particularly well, and that there is market failure everywhere, Kar asked the panelists for tips on getting deals through. Gray said the important point in preparation alongside the legal and financial due diligence is a proper assessment of the external environment, which is creeping into regulatory processes, and is clearly influencing how regulators are assessing transactions.

On the technical side, Calcagno concluded that being in control of the risk-reward trade-off is important, ie, making that call whether to go ahead with a merger that has a substantial possibility of being blocked, but where the reward if that merger goes ahead is significant and worth the risk.